Ahdaf Soueif: What you saw in Egypt was humanity at its best 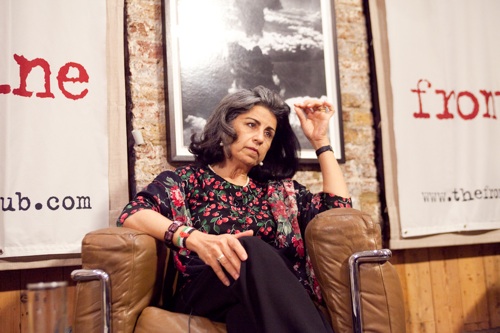 The revolution in Egypt was “a moment whose time had come” said author and commentator Ahdaf Soueif at the Frontline Club on Wednesday.

The author of the bestselling Map of Love told BBC News presenter Mishal Hussein how she had been in Jaipur in India at a literary festival on 25 January when the first protests took place but returned in time for the Friday “day of anger” on 28 January.

We were waiting, [in Embeba] basically loitering near the small mosque there and the preacher went on forever at the end. Before he finished a shout went up, it was one of the young men on the shoulders of another one or two and all in all it was about 15 people.

The sound was that mix between a shout or a chant or cheer that you must have heard if you were following the Egyptian revolution. It’s very rousing and makes your heart go with it. We started moving through the streets and the idea was that this core group goes through the neighbourhood and the particular chant that was used was one that was designed to attract people and make them come down from their homes and join the protest.

Soueif described how groups had been “hanging about” in several locations in Cairo and elsewhere in the country, waiting for the right moment at the end of Friday prayers. The scale of the protests had surprised everyone, she said.

What had begun as a young people’s movement was joined by “everybody” said Soueif who added that “four generations” and all sectors of society took part, from those who worked for daily wages to those “who parked their Mercedes by the opera” to join protests.  Rural and urban people were also represented by delegations sent by other cities and towns.

It was accepted that decisions would come out of Tahrir and so they were there to give it legitimacy and be part of the process of decision making.

In those 18 days in Tahrir square people formed circles on the ground and by evening time you would see 150 people sitting talking about politics and ideas and when a group agreed on something it would pass over to other groups and eventually there was a central point, what they called ‘Broadcasting House’ where there was a microphone with people in charge of it.

An idea, if it was good enough, would reach the microphone and would be broadcast and it would be either booed or cheered and hence rejected or adopted.

The decision to send in “the cavalry and the one camel that was supposed to defeat the revolution” was “completely strange” and made the people in the Square even more determined, said Soueif.

They resented how the regime claimed that they were not ready for democracy and that without the regime to “sit on our necks permanently, then you’re going to get a society so fanatic, so extreme, so violent, there will be rivers of blood that will wash across Europe”

The Egyptian people had been pleased to “find themselves” and “re-find their image and redefine it and declare it, said Soueif:

Suddenly we go from a progressive people who know what they want and are demanding dignity and freedom to being attacked with camels in best Orientalist Daniel Pipes fashion.

Fiction and film had allowed people to “exercise their muscles of empathy” towards the Egyptian people and that partly explained why there was so much support for them and their protest.

Another thing is that the spectacle of the revolution was done with such grace, it was so relaxed and it was so nice to look at and if you understood the jokes it was funny, yet it could raise its game and defend itself when they came at it with bullets or with stones.

On the night they attacked, the peripheries of the Square were fighting a battle, a very efficient and ferocious battle against the paramilitaries and in the heart of the Square there were stand up comics.

If you want to hear more about the revolution in Egypt there is a fantastic opportunity to hear some of the key players at tonight’s event at the British Institution Protest, technology and the end of fear.