With two expensive land wars draining the treasury, the Pentagon wants to prevent future conflicts without spending a lot of money. Two years ago the Navy launched its first, roughly annual Africa Partnership Station, sending ships on solo cruises up the West African coast to deliver training and humanitarian aid. The idea: to win new friends and re-assure old ones, and boost their ability to handle security crises on their own. Our own David Axe joins the landing dock USS Nashville for APS 3.0 in Gabon. 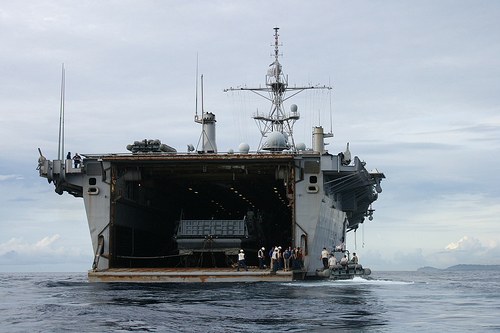 USS Nashville lost a day’s work in Libreville, Gabon, last week, when upon arriving in the West African capital, the crew discovered that the 40-year-old Nashville wouldn’t fit at the city’s tiny pier. Instead, she anchored a mile offshore, and used her boats to ferry people (see video).

The issue was less Nashville’s sheer bulk — 570 feet long, 17,000 tons displacement — than her draft. The 40-year-old gator’s bottom is only 20 feet underwater, but she needs extra clearance to suck seawater for her old-fashioned steam-generating boilers. The crew told me a modern ship, with a gas-turbine power-plant, wouldn’t have such problems.

Which raises the question: Is Nashville, and any ship like her, the right platform for Africa Partnership Station? Lieutenant Commander Chris Servello said amphibious ships, in general, make good foundations for these soft-power missions, for they are “non-threatening” and can carry lots of stuff. But Commodore Cindy Thebaud said it’s possible to be too big. “Many of the navies and coast guards with which we work are very small and easy to overwhelm,” she said. She strongly hinted that smaller vessels, perhaps better suited to really shallow waters, are the way to go.

Fortunately, the Navy’s on it. The next iteration of Africa Partnership Station, this summer, will be anchored on Swift, the 300-foot-long catamaran, drawing only 11 feet. The Navy has only two catamarans in service, but will add at least 10 in coming years.