A Q&A with Julian Assange (part I): on the Arab Spring, phone hacking, and WikiLeaks’ ethics

Yesterday WikiLeaks editor Julian Assange was awarded the Sydney Peace Prize gold medal for Peace with Justice at the Frontline Club. You can read our report of events here.

After Assange gave his acceptance speech, there was time for a question and answer session. He spoke in depth in reponse to many questions, giving insight into his position on everything from the role WikiLeaks may have played in the uprisings across the Arab world, to his opinion of the News of the World phone hacking scandal.

You can now find the first half of our edited transcript of the Q&A below. 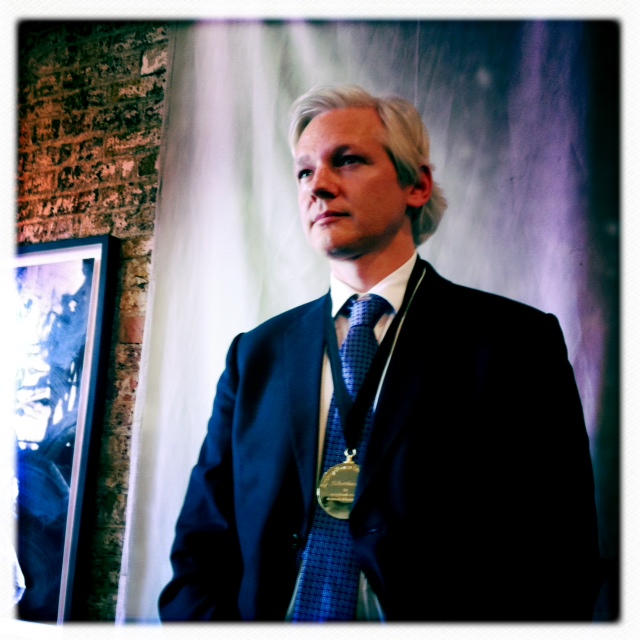 Yes it does appear that there was a significant role. I saw a documentary recently interviewing professors and people in the street in Tunisia outlining some of what that role was. We tried very hard to release as much material relevant to that part of the world back in early December. A wonderful Lebanese newspaper by the name of al Akhbar took alot of our material and translated it to Arabic. And other sites also translated it to French and that material then spread. al Akhbar, for its efforts, was attacked and redirected to a Saudi website for 24 hours. It was then attacked by computer hackers using denial of service attacks and then increasingly sophisticated denial of service attacks, and finally, very sophisticated hackers that I attribute to the state intelligence went in and wiped out their entire publishing operation for months. Approximately one month ago, they started publishing again.

In relation to Egypt, I think our most significant role there was to concentrate on the information to do with [former army general Omar] Suleiman and [former president] Hosni Mubarak. Suleiman you may remember was posited as being a vice president who would somehow take over the role of Mubarak. And he … was a long term partner with Israel and the United States. He was a trusted pair of hands as far as they were concerned in relation to the relationship between Egypt and Israel. [He was] involved personally, it is alleged, in the torture of a number of rendered people.

So, by bringing all that information out on a consistent basis when no one else was willing to do so, we made it very difficult for the west to be able to posit Suleiman as an alternative power structure within Egypt […]

We must remember [American] vice-president [Joe] Biden said on the one hand that I was a high tech terrorist and on the other hand that Mubarak was not a dictator.

What do you think about Australia’s hypocrisy championing freedom of speech during the [Arab] revolutions but denouncing  yours; and what would you say to detractors who accuse you of hypocrisy, and say you’re all for transparency unless it’s turned on you (in terms of accusations of ego or your court cases)?

There’s a comment I saw on a newspaper article last night that puts it well: WikiLeaks is the most scrutinised organisation per capita in the world. We have something like ten to twenty full time staff and a large volunteer core … We are a very small operation. We had (or have) an 120 man CIA taskforce, operatives here in the UK and in other countries, all scrutinising us – and an extremely contemptive media. Like it or not we are the most transparent organisation in the world. Of course, it is our role to give knowledge to the people about power; it is not our role to prevent people giving knowledge to people about power. In fact, one of our core principles is to protect the identities of whistleblowers. So sometimes one needs to be opaque to protect people. We are an organisation facing extraordinary threats from a superpower. It is absurd that should need to make that statement, but that is the reality.

The reality is that here I am in an absurd situation receiving the Sydney peace medal. I am an Australian citizen and I am receiving it in London. At the same time, I have a state surveillance device attached to my ankle. That is the absurd situation we are in. So this rhetorical threat to try and apply a double standard to us is just that.

And you will notice a similar – this is a basic trick in rhetoric – one was done last year, when we exposed the deaths of 20,000 people in Afghanistan, including many children killed by special forces operations and so on. The response by the United States government to our exposure of all that blood, was to say: Julian Assange has blood on his hands. The first response. Because we were saying that they were wading in blood. And so that is just a basic trick of rhetoric.

If you now Google ‘blood on hands’ and ‘WikiLeaks’ without the word Pentagon, you will see there is approximately 770,000 web pages. If you Google for Pentagon and ‘Blood on hands’, without the word WikiLeaks, you will see there’s about 60,000 web pages. So in terms of the amount of articles that have been published, many talking about the blood of the Pentagon, the blood of WikiLeaks – there has been ten times as many that have been about the blood that WikiLeaks has supposedly caused and yet even these organisations cannot adduce a single case of anyone being harmed by our work over the course of [the last] four years.

What about [recently killed al Qaeda leader] Osama [bin Laden] and the alleged Mush-Bush deal between then US president George W. Bush and then Pakistani president Musharraf? Do you have any WikiLeaks cables supporting the allegation that there was a secret deal between the two presidents at the time? … And what do you make of operation Geronimo?

We have a lot of documents, but the cables along are 285 million words and I do not have them all in my brain at any one point in time. That’s why we’re working with 73 other media organisations … in order that you may do this work that you are able to do more efficiently than us, and directly to your audience. So I don’t have off hand more information about that.

Just a general question on the ethics, and how
you derive the ethics of openness, investigation and privacy. Where does one make the ethical distinction between  an operation say, WikiLeaks directed towards powerful institutions and processes and something such as the News of the World phone hacking scandal and the processes therein. What is not merely the contingent ethical decision, but what is the deeper political ethical basis on which one would make those distinctions?

I quite like it [the question]. And this probably horrified my British colleagues and my lawyers, but I wrote about the News of the World phone hacking scandal. And what I said back about a year and a half ago is that the British press should be very careful what they are doing in relation to spending time on that as opposed to all the other injustices that they could be spending their time on. Because we  had been involved in something called the Petrogate scandal in Peru just a few months before, where we revealed 87 telephone intercept tapes of Peruvian politicians speaking for businessmen. The famed audio tapes. And that was the biggest political story in Peru that year.

And to engender a climate where that is hard to do is extremely dangerous. Now of course, the media abuses people and misuses its power in approximate proportion to the size of the particular industrial grouping. And News Corporation is a very large industrial grouping, and it uses its power accordingly. But when organisations like the Guardian write over a hundred stories about putting in default passwords in to voice mailboxes – because that’s what we’re actually talking about here – they are taking space from other things and they have other agendas at work. The other agendas at work are: attacking a newspaper rival; the New York Times became involved because similarly it wants to attack the Wall Street Journal.

It is to say, that the interests of the proletariat, which are the readers of the News of the World, are insignificant and are not important, and that the middle class moral majority that embodies itself in the Guardian is to be the arbiter of what is important and what is not important.

The reality is – if readers of the News of the World (and there are very many) find a particular thing to be of significance, to be influential to their lives, about how that person truly behaves … people have a right not to be influenced by people whose external affairs and statements do not mirror their internal affairs and statements. It also seems to me to be a way to get in to the Guardian news about celebrities and tabloid salacious rumours: you can just report on what News of the World are saying.

Part II of our Q&A transcript can be viewed here, with Assange commenting on the Lockerbie bombing, distrust between Pakistan and the United States, and the Wall Street Journal’s new ‘Safe House’ leaks site.