‘A World Not Ours’ – And A Story That Now Is

However, at first they didn’t anticipate the media exposure and awards that the film has gone on to achieve:

“The only thing that kept me going was that if no one else ever is going to watch this then I will watch it with my family, and it would be a record for my family, and if one day I have kids then they can watch it.”

In fact the intimate nature of the film is what provides its strength and charm. As questions turned to the wider political and historical climate, producer Campbell explained:

“You can’t fit everything in and I think pretty much from the outset it was a very personal film for Mahdi, and it was, you know, these people exist in this context and if you want to explore it [the situation for Palestinians] you can look at the macro or the micro, and that [the micro] is what we went for. . . . We didn’t set out to make a definitive history of anything.”

“This was meant to be the gateway into this kind of world, and the history sort of seeps in via the characters.”

An audience member remarked how the two main characters, Fleifel’s grandfather and best friend Abu Iyad, offer a particularly valuable insight into what it is like for ordinary people of different generations living in Ain el-Helweh. Fleifel replied:

“I sometimes sit and think what kind of an experience it would have been for my grandfather to suddenly wake up one day having lost everything and then finding himself in a tent with his siblings, waiting. And then 65-years later he is still waiting.”

Although his grandfather is apparently non-plussed at his own rise to fame on the silver screen, as Fleifel recounted their phone conversations: 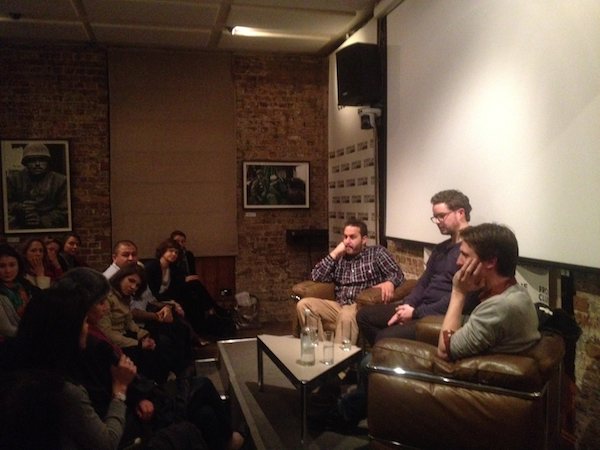 If you missed out on this screening you can catch it on Friday 21 February at the Institute of Contemporary Arts. There is also a campaign to get the film eligible to be nominated for an Oscar, which you can join in with here. [vimeo clip_id=”57316804″ width=”630″ height=”354″]