A conversation with Patrick Cockburn

Member of arguably the most revered family of journalists in the English-speaking world, Patrick Cockburn has always been in the folds of my research about the troubled Middle East and North Africa region.

Perched on the famous stage I warned him that the interview may focus more on his career than the matters at hand, to which he reassuringly responded, “Ask me anything”.

Cockburn was promoting his latest work, The Age of Jihad: a compilation of diary entries covering the evolution of the Middle East conflict and the rise of the Islamic State in a region harassed by foreign intervention and defaced by socio-economic turmoil.

The sustained journalistic narrative begins in Afghanistan during the American invasion, an event that Cockburn sees as having a pivotal knock-on effect on the Iraqi invasion two years later, which in turn bred the reviled Jihadist monster that is leaking into the Syrian civil conflict, just as Cockburn feared.

His coverage is heightened by an acute sense of understanding and complete cultural submission, palpably evident in the way he describes his most dangerous and most enlightening experiences on the road. 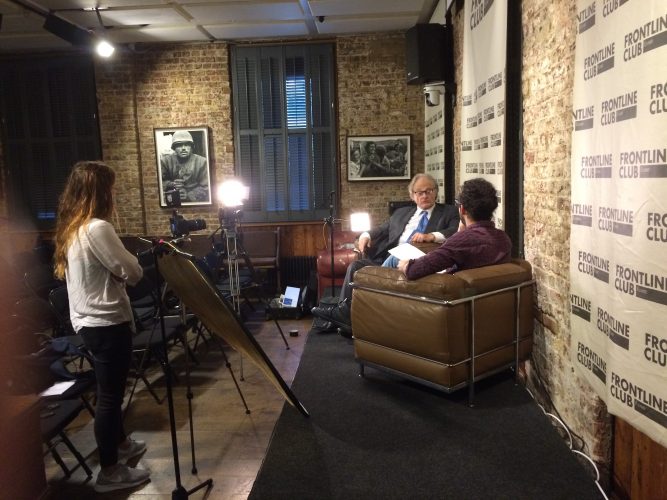 Conversation ebbed and flowed, and resumed after our interview at the bar. Before I knew it I was just another mop of hair in a sea of heads eagerly awaiting his re-emergence on stage for an open discussion with Azadeh Moaveni.

The Age of Jihad is a must-read for anybody looking to make sense of the nine wars that are currently being waged in the space between the Western border of Pakistan and North Africa.

Each conflict is nuanced, its history and its fanatics. We, as consumers of entertainment, are taught to laud our heroes and demonize our villains, forgetting that the real world breeds only people and their overlapping interests.

The message that Cockburn wishes to push to our attention ahead of dramatized “bang-bang” media coverage of the Middle East is: “I’ve been there, it’s not that simple.”