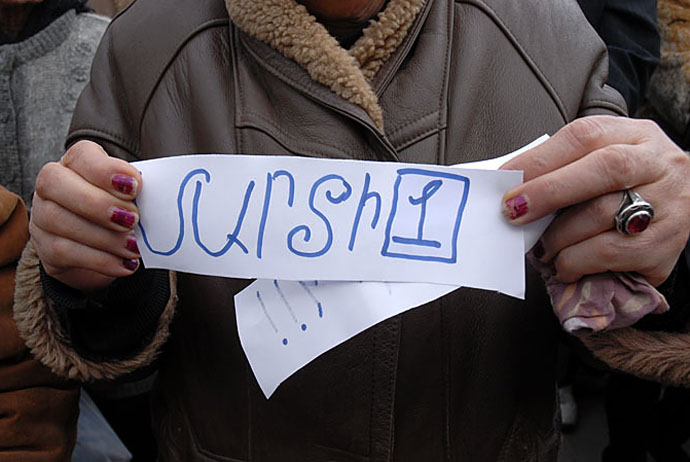 Despite some concern that yesterday’s first anniversary of the deadly post-election clashes between opposition supporters and security forces might end in trouble, the day passed peacefully. Although the event to mourn the deaths of 8 civilians and 2 policemen had not been authorized by the municipality, the authorities did not intervene to prevent the gathering.

Given two crtitical reports from Human Rights Watch and the U.S. State Department published last week, few expected otherwise. One year later, the opposition cannot gather the numbers necessary to confront the security services and the government can well do without further news reports of bloodshed on the streets of the Armenian capital.

As it was, at least 10,000 supporters of the extra-parliamentary opposition led by the country’s first and former president, Levon Ter-Petrossian, gathered at the capital’s manuscript museum, the Matenadaran, before marching to the scene of last year’s violence. Predictably, the organizers of the protest claimed 100,000 attended the rally while police reported a turnout of 5,000. 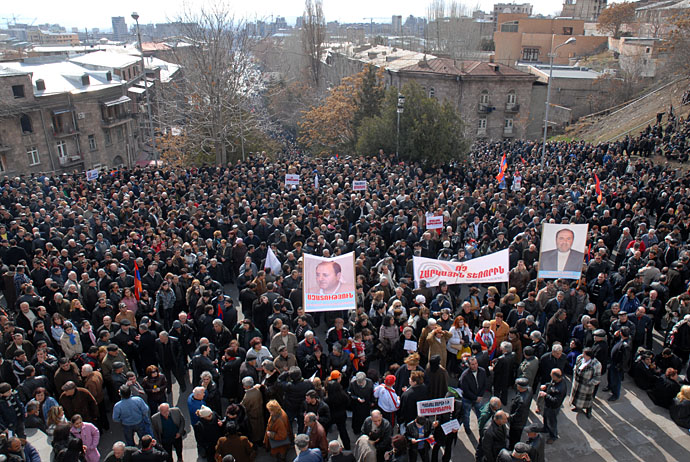 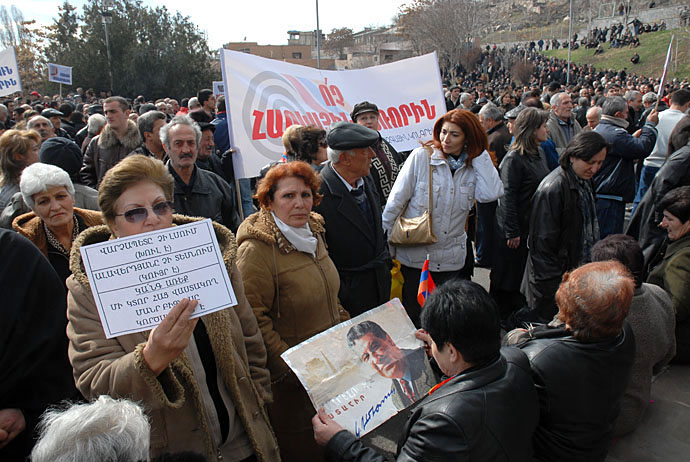 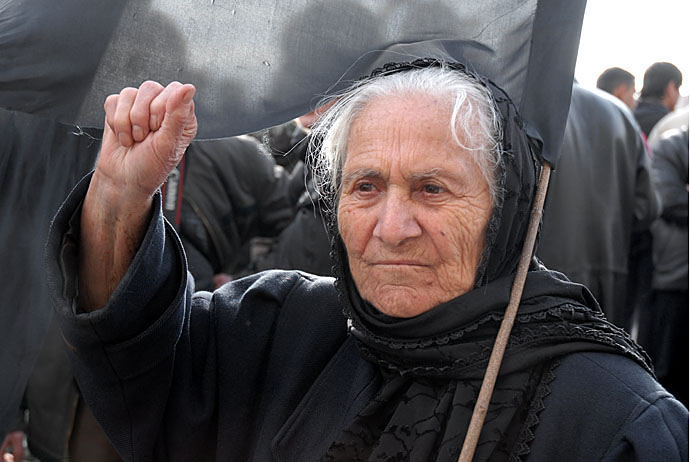 Reuters, AFP and the BBC put the number at 10-20,000, but that probably doesn’t matter. The demonstration was the first organized by Ter-Petrossian’s Armenian National Congress (HAK) since last October and attendance was pretty much in line with expectations one year after a disputed presidential election.

Nevertheless, security was high with reports of some roads into the capital being blocked by police and busloads of riot police parked close to the presidential palace. Water cannon trucks were also to be seen close to the Yerevan opera although police were not decked out in riot gear at the Matenadaran itself. 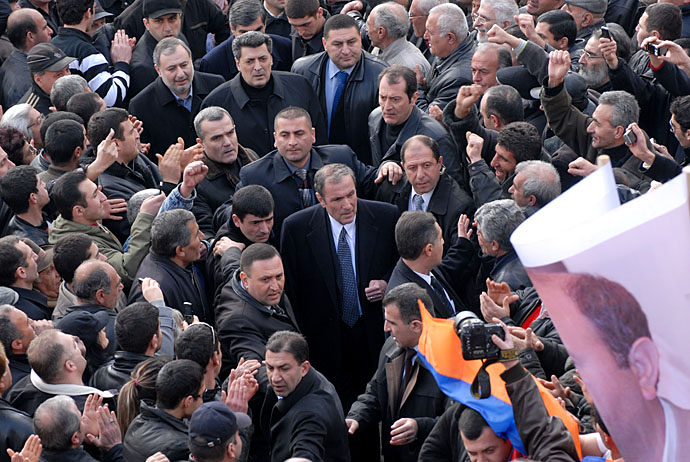 The mood was also noticeably more reserved than at past rallies. While some in the crowd were still understandably angry a year later, most were subdued and some even cheerful, probably glad that such meetings were once again being held. Even so, the applause and cheers greeting the arrival of Ter-Petrossian were less enthusiastic than at past events. 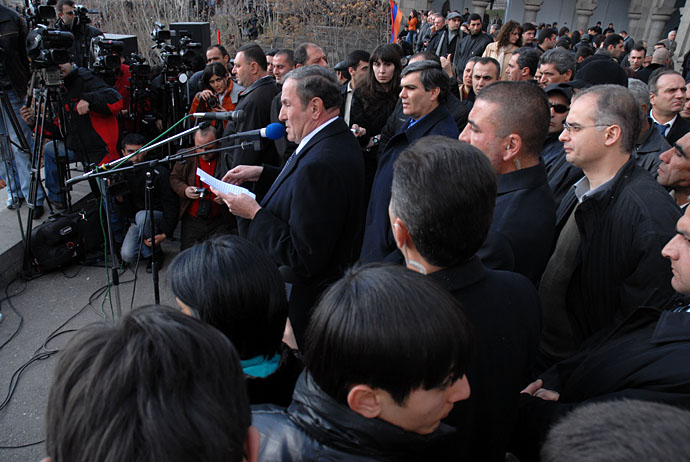 Last year, for example, the opposition told supporters that they were close to victory. This year, however, they were arguably more realistic. Some allege that faced with dwindling attendances at last year’s rallies, Ter-Petrossian might have struck a private deal with the authorities to ease post election tensions.

Whatever the reason, RFE/RL reports that Ter-Petrossian’s speech was more cautious than in the past.

In a 45-minute speech at the Matenadaran rally, Ter-Petrosian again blamed the authorities for the bloodshed. “For a whole year the authorities have done nothing to identify those primarily responsible for the crime — the murderers, shooters, shop looters — because all of them are their people,” he charged. “Quite the opposite. They have saved no effort to cover up their crimes.”

Ter-Petrosian, who had touted his 2008 campaign as a “classic bourgeois-democratic revolution,” made clear on Sunday that he is now against attempts to effect “immediate regime change” and favors instead a “prolonged struggle” with the Sarkisian administration. “The old-fashioned ideas of revolution or uprising must be finally driven out of our country’s political agenda,” he said. “As long as that hasn’t happened, Armenia can have no chance of becoming a rule-of-law and democratic state. History knows virtually no revolutions that engendered democracy and welfare.”

“Any regime change must take place through solely constitutional means. Namely, by means of legal elections, which is the only guarantee of establishing a democratic state. And we will achieve such legal elections,” added the former president.

The remarks clearly did not strike a chord with sections of the crowd that burst into “Now! Now!” chants when Ter-Petrosian uttered the words “uprising” and “revolution.” He drew only tepid applause from them after finishing the speech. link

Warning that the global economic crisis is set to hit Armenia hard, Ter-Petrossian did at least say that the authorities would soon find it harder to remain in power. For most observers, however, the fact that the march to the site of the final post-election stand against last year’s disputed election did not erupt into violence was all that mattered. 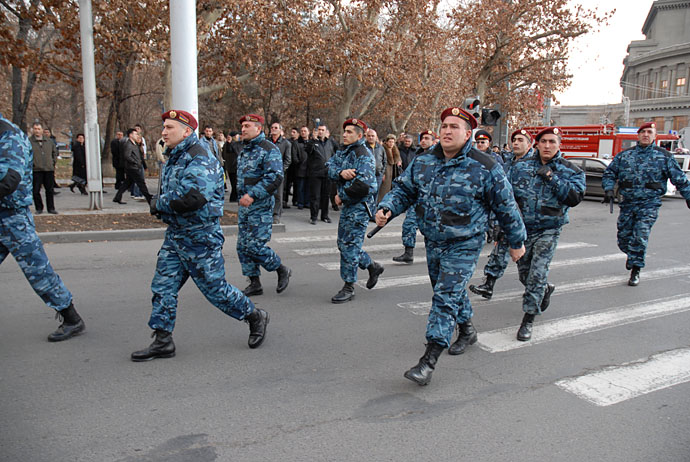 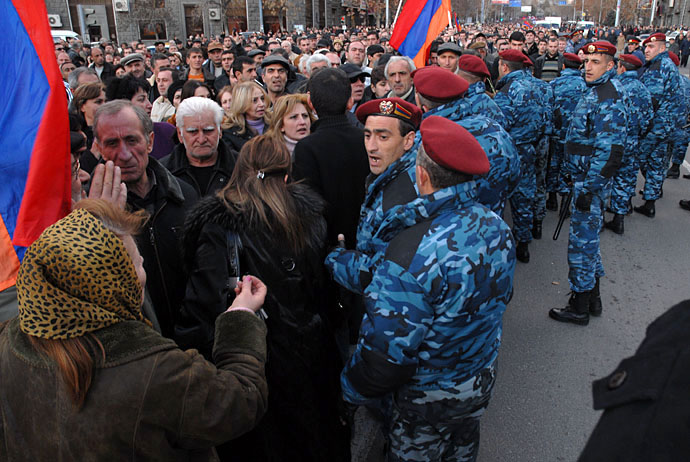 With the exception of one brief moment of tension when a crack squad of special police forces ran to one part of the march which followed, the day passed without incident. The opposition also announced that they would stage their next rally on 1 May, presumably with the municipal election planned for the end of the same month in mind. 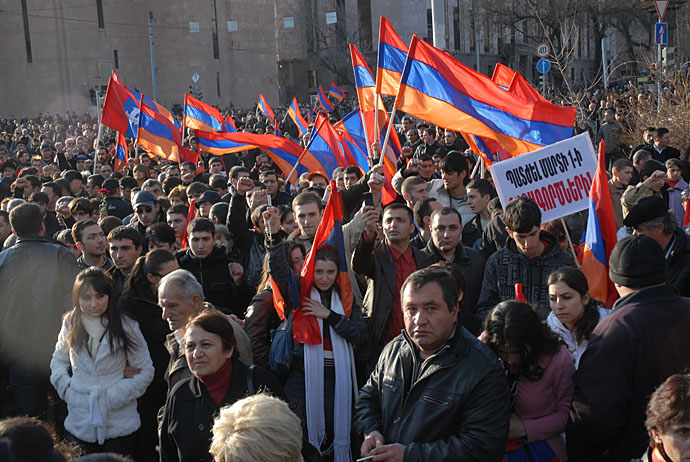