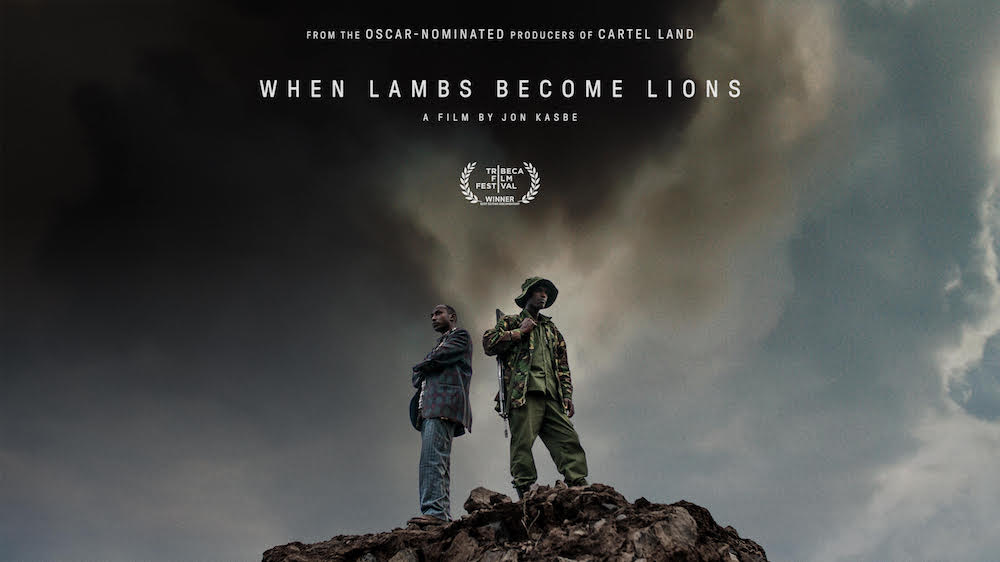 Join us for a screening of When Lambs Become Lions followed by a Q&A with director Jon Kasbe and Al Jazeera’s Environmental Editor, Nick Clark.

In a Kenyan town bordering wildlife conservation land, two men try to hold onto their increasingly fragile status quo. A small-time ivory dealer fights to stay on top while forces mobilise to destroy his trade. When he turns to his younger cousin, a conflicted wildlife ranger who hasn’t been paid in months, they both see a possible lifeline.

The plummeting elephant population in Africa has captured the attention of the world. And as the government cracks down, the poachers face their own existential crisis. For them, conservationists are not only winning their campaign to value elephant life over its ivory, but over human life as well. Who are these hunters who will risk death, arrest and the moral outrage of the world to provide for their families?

Director Jon Kasbe followed the film’s subjects over a three-year period, gaining an extraordinary level of access and trust as he became part of their everyday lives. The result is a rare and visually arresting look through the perspectives and motives of the people at the epicentre of the conservation divide.

Nick Clark is a broadcast journalist and writer specialising in environmental coverage. His latest work features an acclaimed documentary for Al Jazeera English on the remote Weddell Sea in Antarctica called ‘Antarctic Ocean Sanctuary’. In 2014 Nick completed a prestigious Fellowship at MIT and Harvard studying the impacts of climate change on terrestrial and marine eco-systems. Nick’s reported on the disappearance of the world’s tropical glaciers in the Andes and the devastation caused by illegal logging in Amazonia. He’s also focused on issues as diverse as efforts to save the Siberian Tiger in the forests of the Russian Far East, the shark fin trade from Hong Kong to the Middle East, the conflict between wolf and man in remote parts of Finland and the plight of gorillas in Uganda. Nick has travelled to the Arctic regions several times – most recently in August this year, to report for Al Jazeera English on the threat of a collapsing iceberg looming over an isolated village in northern Greenland. Nick’s won a Royal Television Society award for directing  & presenting a six part series on the River Thames. He’s also reported general news, taking in stints in Afghanistan, Libya – as Gadaffi’s regime fell – as well as many African assignments.

Born to an Australian mother and an Indian father, Jon Kasbe spent most of his childhood traveling extensively. Growing up in this environment instilled in him a deep curiosity and desire to explore the world. He soon found documentary filmmaking to be a way to immerse himself in his travels and share discoveries with others. At age 10, he bought his first camera in order to interview children in war-torn Serbia, where his parents were volunteering. Now, at 27, his short films have screened around the world, garnering an Emmy Award, two Emmy nominations, and recognition from the Webbys, SXSW, Hot Docs, Vimeo Staff Picks, and The White House News Photographers Association. WHEN LAMBS BECOME LIONS, which he filmed, directed and produced, is his feature-length film debut.

Kaddu Sebunya is president of the African Wildlife Foundation. He began his career serving as a project manager with WaterAid and as a relief program officer with Oxfam UK. Beginning with his post as the Associate Director for the United States Peace Corps in Uganda, Sebunya’s career began to focus more on conservation. He later served as a country program coordinator with the World Conservation Union—now the International Union for Conservation of Nature, or IUCN—and as a senior policy and planning advisor for Conservation International.