For this special event, Helen Chadwick Song Theatre will perform extracts from War Correspondents. The show was inspired by recent interviews with journalists who have worked on the front line, covering conflicts from Bosnia and Iraq to Chechnya and Liberia. 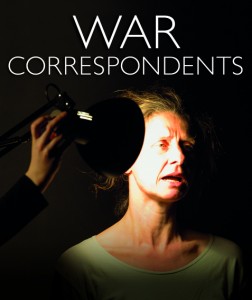 Amongst other interviews, the show also includes testimonies from the Frontline Club members including: Martin Bell, Vaughan Smith, Kate Holt and the late Tim Hetherington.

The performance will be followed by a discussion touching on the issues raised in the songs including impartiality, the guilt that builds up while reporting on people when they are at their most vulnerable, censorship, the increased dangers of working in the field since 9/11, the difficulties of safety for independent journalists in particular, and the personal cost to those reporting.

War Correspondents is created by the company with composer Helen Chadwick (Dalston Songs), choreographer Steven Hoggett (co-founder of Frantic Assembly and Oliver Award-winner for Black Watch) and creative associate Miriam Nabarro. It depicts the extraordinary stories and life changing experiences of journalists – men and women who risk their lives in extreme circumstances.

This will be followed by a discussion and Q&A with some of the creative team and the journalists whose testimonies helped create the show.

Kate Holt, a photojournalist based in East Africa. She photographs for the international media, NGO’s and corporate clients.