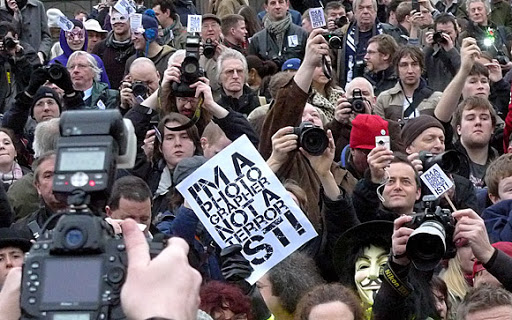 The War On Press Freedom

Using the work of video journalist Jason Parkinson, we explore the ways in which press freedom in the UK is being restricted. From photo journalists being treated like terrorists to the physical abuse of protest journalists, the waging war on the freedom of the press is well under way.

Now is the time to remember that press freedom is something that is integral to democracy, not an easily dismissed afterthought. Join our esteemed panel as they discuss their own experiences of having their journalistic endeavour restricted as well as exploring what the legal implications of this over reach are.

Jason Parkinson has spent 15 years as a freelance news and feature documentary video journalist. His work has covered the UK, Ireland, Egypt, Turkey, Mexico, Russia, Greece, The Balkans, Spain, Germany, France, Italy and USA. Jason was nominated as a finalist for the Rory Peck News Award for coverage of the Egyptian Revolution in 2011 and for coverage of the London Riots in 2012. Jason has 16 years experience of writing news, features and comment articles for newspapers and magazines, including the Guardian, Herald Scotland, The Journalist , Big Issue and The Dart Centre.

Professor Claire de Than is a senior legal academic of more than 25 years’ standing, and a Jersey Law Commissioner, currently working on a Criminal Code and on laws relating to open justice. She has over 85 legal publications in total, including 15 books, chapters in leading legal monographs and edited collections, such as Reed and Bohlander, Substantive Issues in Criminal Law, and articles in a variety of leading national and international journals, including the Modern Law Review and the Criminal Law Review. Her publications and reform proposals have been adopted by governments, regulators and professions. Her research fields include media law, criminal law, capacity and consent, comparative law of tiny jurisdictions, human rights law and disability law. She has been an expert for the Law Commission of England and Wales on two recent projects, and made many media appearances. She has advised several governments and many organisations on criminal law, human rights and law reform issues. She is the Chair or Vice Chair of several charities.

Cinzia D’Ambrosi is an award-winning photojournalist, whose work draws attention to structural violence and abuses of state power on people. Cinzia has over 15 years of experience working in the UK and internationally contributing to a number of editorials such as Der Spiegel, New Internationalist, Warscapes.  Her work includes investigations on miners‘ exploitation in illegal coal mines in China, the effect of hidden homelessness on women and children in the UK and police violence against refugees and asylum seekers. She is the founder of the Hate Hurts project and the Photojournalism Hub. Her ongoing project Hate Hurts, which documents security and police violence against refugees in Europe, has been used in extensive campaigns by Amnesty International, shown in many exhibitions in Europe and featured on Czech National TV. Hate Hurts was selected for the European Month of Photography in Bulgaria (2018), won an Award from the Photographers Gallery in London (2017), whilst her short film Prejudice and us on the impact of racism and prejudice on youth lives in London received ‘Best Campaign’ Award from Hammersmith United Charities (2016).

Tom MacLeod is a presenter and journalist working for both Sky News and the BBC World Service. He has covered international news stories including US and UK elections, the 2016 Nice terror attack, the 2016 Turkish coup d’état attempt and interviewed several Secretaries of State and UN ambassadors.