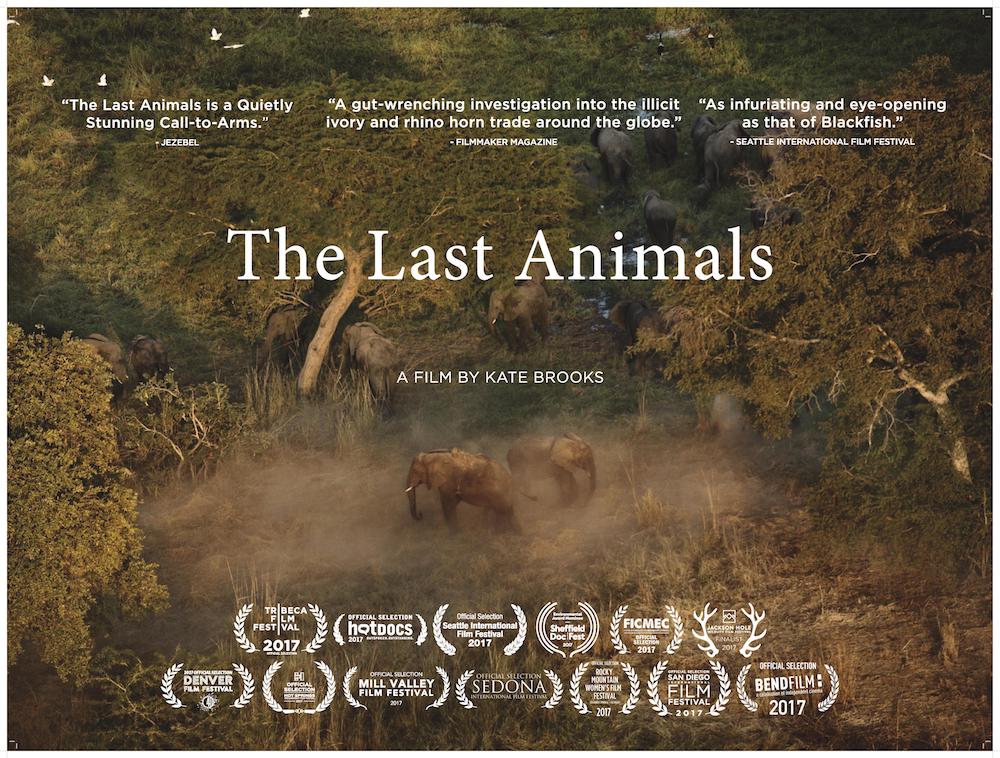 We will be screening The Last Animals followed by a Q&A with director Kate Brooks, Mary Rice from the Environmental Investigation Agency, and Will Travers of the Born Free Foundation. The screening will be followed by a discussion on the growing pressure on DEFRA to implement a blanket ban on ivory sales. Ivory remains on sale in many EU countries in markets, auctions, antique shops and online. The UK continues to be one of the world’s largest exporters of antique ivory to countries such as China, which permits the sale of old ivory to continue, maintaining a climate of demand for ivory that illegal poachers are meeting.

The Last Animals is a story about an extraordinary group of people who go to all lengths to save the planet’s last animals. The documentary follows the conservationists, scientists and activists battling poachers and criminal networks to protect elephants and rhinos. From Africa’s front lines to behind the scenes of Asian markets to the United States, the film takes an intense look at the global response to this slaughter and the desperate measures to genetically rescue the Northern White rhinos who are on the edge of extinction.

Humphrey Hawksley  is a best selling author and leading correspondent for the BBC and has reported on key conflicts and crises around the world for more than thirty years. His work includes award-winning investigations into animal abuse in China and films on human rights violations against children in international supply chains. His investigations into the global chocolate industry and brick-making in India led to the setting up of international campaigns calling for action. His latest thriller is Man on Ice set on the US-Russian border and his next non-fiction Asian Waters, The Struggle Over the South China Sea and the Strategy of Chinese Expansion will be published in June.

Kate Brooks began working as a photographer in Russia at the age of 20 while documenting daily life in the years just after the collapse of the Soviet Union. Following September 11th, Brooks moved to Pakistan to photograph the impact of foreign policy in the region and daily life in Afgahaistan. In 2003, she covered the American invasion of Iraq and the beginning of the insurgency for TIME. For more than a decade she proceeded to work across the greater Middle East, photographing the unfolding of history, the imapact of conflict on civilian populations, alongside every day moments in the lives of ordinary people. Kate then turned her eye to the man-made animal mass extinction in this latest project.

Mary Rice has been with EIA since 1996, joining as a volunteer before holding positions including Head of Communications & Projects, Head of Development and Head of Campaigns. She has been Executive Director since 2008 and is responsible for directing the long-term strategic management of EIA as well as working on specific projects and leading the Elephant Campaign.