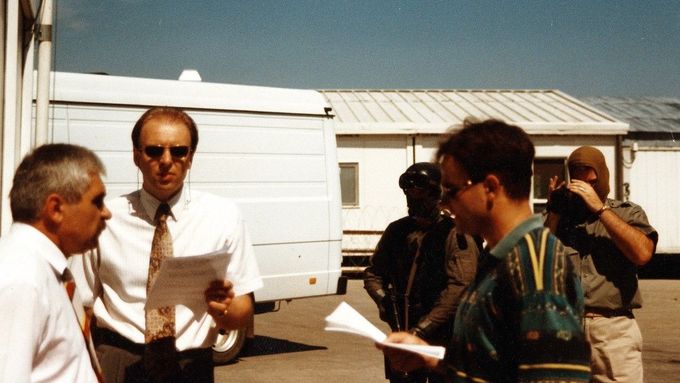 The Investigator: Demons of the Balkan War

The conflict in the former Yugoslavia saw unspeakable acts of violence committed against civilians, soldiers and prisoners of war. One of the many sites where atrocities took place was Ovčara, near the town of Vukovar, where, in November 1991, 261 men, mostly Croatians, were executed by Serbian paramilitaries and buried in a mass grave.

One of the investigators tasked with tracking down and arresting those responsible for that massacre was Vladimir Dzuro, a former homicide detective from Prague. Ahead of the English publication of his book, The Investigator, Dzuro will be at Frontline to talk about how he and his team tracked down and arrested one of the key perpetrators, Slavko Dokmanovic, the mayor of Vukovar and the first in a long list of war criminals to be tried and convicted by the UN International Criminal Tribunal for the former Yugoslavia (ICTY).

Dzuro will be joined by Joanna Korner, Senior Prosecutor for the ICTY between 1999-2004 and 2009-2012, who was responsible for prosecuting high-level leaders charged with grave breaches of international humanitarian law, as well as Kevin Curtis, a former colleague and ex-English police officer who participated in the arrest of Slavko Dokmanovic. Journalist and author Tim Judah will be moderating the discussion.

This event is organised in collaboration with the Czech Centre London. For more information on the book, please visit this website.

Reviews for The Investigator:

“The Investigator is a raw and unique first hand account of an extraordinary pursuit of justice in the face of absolute horror.” – Julian Borger, Pulitzer Prize-winning journalist and World Affairs Editor for the Guardian

“Personal accounts of investigations of war crimes, such as this one… breathe life into the abstract project of accountability and show the challenges of operating a criminal justice system in an international environment.” – Louise Arbour, Chief Prosecutor for the International Criminal Tribunal for the former Yugoslavia (1996-99)

Toby Cadman is a barrister specialising in war crimes, international terrorism, extradition and human rights. He has been senior legal counsel to the chief prosecutor of the Bosnian war crimes chamber, and defence counsel at the Bangladeshi war crimes tribunal. He is a co-founder of The Guernica Group and Joint Head of Chambers at Guernica 37 International Justice Chambers.

Kevin Curtis is a former Detective Sergeant with the UK police and from July 2008, was the Chief of Investigations for UNICEF, retiring in February 2018. Between 1995 and 2004, he headed an team that investigated war crimes and grave breaches of international humanitarian law at the International Criminal Tribunal for the former Yugoslavia (ICTY) and in 1999 he led the investigations into atrocities committed by Serbs and Albanians in Kosovo, then the Republic of Serbia. He was involved in some notable arrests of war criminals, who following arrest, subsequently stood trial in the International Court in The Hague. In 2004, he was engaged by the Independent Inquiry Committee (IIC) into the Oil for Food Programme in Iraq, (the Paul Volcker Committee) as a team leader. In late 2005 he became Investigations Adviser to the audit and investigation section of United Nations Development Programme (UNDP), until joining UNICEF.

Vladimír Dzuro worked as a criminal detective between 1983 and 1995, initially investigating violent crime with the Criminal Investigation Department in Prague and later at the National Central Bureau of Interpol in Prague. In 1994, Vladimír actively participated in the work of the United Nations Protection Force (UNPROFOR) in the former Yugoslavia. In April 1995, he began a ten-year stint as an investigator with the Office of the Prosecutor at the International Criminal Tribunal for the former Yugoslavia (ICTY) in The Hague. Vladimír currently works as Chief of Headquarters Office at the UN Office of Internal Oversight Services in New York.

Joanna Korner worked as Senior Prosecutor for the International Criminal Tribunal for the former Yugoslavia between 1999-2004 and 2009-2012, prosecuting high-level leaders charged with grave breaches of international humanitarian law (IHL). She has lectured on IHL to Iraqi Judges and Cambodian Defence Lawyers. In June 2004, she was appointed Companion of the Order of St. Michael and St. George (CMG) for services to The International Criminal Tribunal for the former Yugoslavia. Judge Korner has been a Grade “A” Advocacy Trainer since 1996. She was the Head of International Faculty of Advocacy Training Council of England & Wales from 2005 to 2012. She has organised and taught on numerous advocacy training courses in the UK and internationally.

Tim Judah is a journalist and author and covers the Balkans and other regions as a correspondent for The Economist. He has worked for many major publications and broadcasters, notably writing wartime reportage from Afghanistan to Ukraine for the New York Review of Books. He is the author of three books on the Balkans—The Serbs: History, Myth and the Destruction of Yugoslavia, Kosovo: War & Revenge and Kosovo: What Everyone Needs to Know—and published a book on the conflict in Ukraine – In Wartime: Stories from Ukraine in 2016. From 1990 to 1991, Judah lived in Bucharest and covered the aftermath of communism in Romania and Bulgaria for The Times and The Economist. After that, he moved to Belgrade for both publications in order to cover the war in Yugoslavia. He moved back to London in 1995 but continues to travel to the region frequently. He is the president of the Board of the Balkan Investigative Reporting Network (BIRN) and a member of the board of the Kosovar Stability Initiative (IKS).