Use this great excuse to get your friends together and explore the members’ Clubroom with it’s fascinating history and displays of memorabilia.

Teams can consist of up to six people, and there will be five rounds of 10 questions. The entry cost is £5 per person, with all money raised going to the Frontline Fund, assisting families of fixers around the world killed or injured while working with the international media.

As one of our prizes, you can win three pairs of tickets to see a new show, The Light Shining in Buckinghamshire opening at the National Theatre on 15 April, 2015. 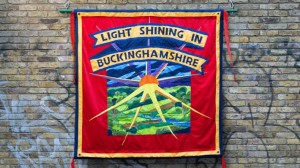 Light Shining in Buckinghamshire tells the story of the men and women who went into battle for the soul of England. Passionate, moving and provocative, it speaks of the revolution we never had and the legacy it left behind.

In the aftermath of a bloody and brutal civil war, England stands at a crossroads. Food shortages, economic instability, and a corrupt political system threaten to plunge the country into darkness and despair.

The Parliament men who fought against the tyranny of the King now argue for stability and compromise, but the people are hungry for change. For a brief moment, a group of rebels, preachers, soldiers and dissenters dare to imagine an age of hope, a new Jerusalem in which freedom will be restored to the land.