The Club Quiz returns in 2015 with quizmasters Caroline Johns and Dr Keith Surridge. They have prepared questions that will test your knowledge and live up to the reputation of being billed as one of ‘the hardest quizzes in London’.

Use this great excuse to get your friends together and explore the members’ Clubroom with it’s fascinating history and displays of memorabilia.

Teams can consist of up to six people, and there will be five rounds of 10 questions. The entry cost is £5 per person, with all money raised going to the Frontline Fund, assisting families of fixers around the world killed or injured while working with the international media. 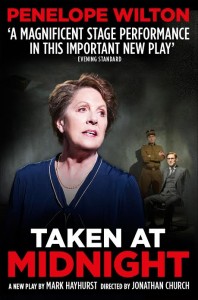 The quiz champions will win three pairs of tickets to see one of the UK’s most acclaimed stage actresses in Jonathan Church’s world premiere production of Taken At Midnight by Mark Hayhurst. Featuring a fine company of actors, this gripping and important play opens at Theatre Royal Haymarket from Thursday 15 January 2015.

Penelope Wilton portrays the role of Irmgard, the mother of celebrated lawyer Hans Litten who, in 1931, puts Hitler on the witness stand and wins. In 1933 when Hitler becomes Reich Chancellor, Litten suffers devastating consequences. The unquestionable love of a mother for her son and her courageous efforts to help him are at the heart of this compelling new play. Fearless and indomitable she confronts his captors at enormous personal risk to fight for his release against the seemingly impossible might of the Nazi regime.

Get a team together and don’t miss out on this fantastic offer!

Caroline Johns is a reformed historian, having given up her PhD when the roof of her garret caved in and the novelty of penury wore off. She left the hallowed groves of academe (lecturing on the BA Journalism course at City University) to cross to ‘the dark side’ that is the private sector and now works for Deloitte as speechwriter to the UK CEO and chief of staff to the global chairman.

Dr Keith Surridge is a history lecturer in several American college programmes in London. He is the co-author of The Boer War (with Denis Judd), which, if you look hard, may even still be available in some good book shops.