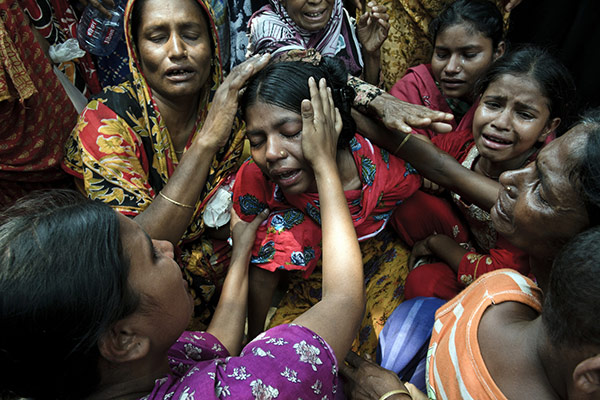 The Cost Of Fashion

PLEASE NOTE THIS EVENT IS POSTPONED UNTIL FURTHER NOTICE  DUE TO COVID-19.

The price of clothing has been decreasing for decades, while the human and environmental costs have grown dramatically. But who really pays the price for our clothing?

The UK spends £27 billion on clothes each year and there’s no sign that our obsession for fast fashion is slowing down. Most of this huge sum is pocketed long before it reaches the salaries of factory workers or cotton farmers. What is the real cost of fashion and how can we make sure a fair price is being paid to the people doing the hard work so they can care for their families?

American photographer Ismail Ferdous’s The Cost of Fashion – a photo and video advocacy project – that began after documenting the Rana Plaza factory collapse in 2013 – continues to spread awareness about the fashion industry and its negative effects on workers. Now based in New York City, Ferdous looks back on the success of the project and talks about his latest work for Nat Geo.

Join Ismail as he presents his work, followed by a discussion and Q&A with, The One Show presenter, Lucy Siegle.

Ismail Ferdous is a documentary photographer with National Geographic from Bangladesh, presently resides in New York City,  who covers social and humanitarian issues. He began his photo and video project, “The Cost of Fashion”, after documenting the Rana Plaza factory collapse, the worst industrial disaster in history. He continued working on same issue with “After Rana Plaza” project, continuing to spread awareness about the fashion industry and its negative effects on workers in Bangladesh- which won first ever Instagram Grant. Ferdous’ photo reportages cover war, climate change, earth quake in Nepal and refugee crisis in Syria, Lebanon, Turkey, in the mediterranean sea, France and Bangladesh. His work won more than 10 major photojournalism awards including twice National Photo Press Award in the US. His work is been exhibited in New York, Paris, Geneva, Dhaka, Delhi, Sao Paolo, Arles, Turin. Ferdous is a regular contributor to National Geographic Magazine, The New York Times Magazine, The New Yorker, Washington Post, Stern, Bloomberg, The Wall Street Journal and many more major news media.

Lucy Siegle is an author, journalist and presenter of BBC’s ‘The One Show’. She has written a weekly ethical living column for the Observer for over the last decade, while also authoring two books. Lucy is also an Executive Producer on The True Cost – a film which documents the injustice and inequality which exists in the fashion industry.