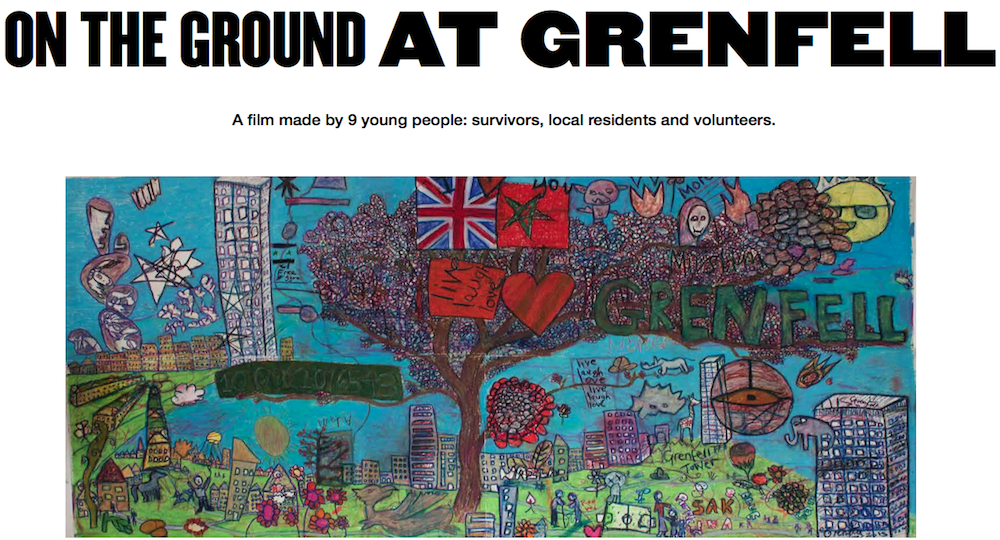 Screening: On The Ground at Grenfell

It’s been nearly 2 months since the Grenfell Tower fire. In this time 9 survivors, local residents and volunteers have felt compelled to make a film to dispel the public’s fear from the Lancaster West community and reveal the deep impact this has had on them as people.

‘The survivors are not statistics they are humans beings’, says Adrianne McKenzie, one of the film-makers who has been struck by the way the survivors are seen in terms of ‘what they can be given … not as people’. Film-maker and youth worker Nendie Pinto-Duschinsky supported the team of young film-makers and describes the film as ‘harrowing to make’ but the ‘articulacy, dignity and insight of the young people will change perceptions’. Young people lost their lives on the night running into the building to save people. We hope the film will transform the way the community are seen from ‘angry and un-relatable’ to the truth that they are ‘coping with their suffering by trying to help other people’. Their humanity and morality is the clear message.

The media has covered the story in ways that the local community are not satisfied with, the evening will touch in the disparity between eye witness accounts and the reporting of events as they unfold on national media as well as the dangerous spread of misinformation.

There will be a discussion after the film with the survivors of the tragedy and the film-makers to share their personal accounts of the fire, and how disasters like this are reported in the UK.

Joining the discussion will be the journalist Ed Vulliamy. Growing up in Notting Hill, Vulliamy has written regularly on the ruthless development of the area that has divided those living in West London. He regularly writes for the Guardian.

Interviews with some of the young people in the film here

Zoe Dainton and David Benjamin lived on the 4th Floor of Grenfell Tower where the fire started. ‘ We’re two of the lucky ones we survived, we got out. People feel lost right now, everyone’s walking round like zombies[…] Here round Latimer where Grenfell is everyone knew each other, was friendly with each other there wasn’t much trouble. It was nice, as a community we were quite close…Some kids are lucky that they won’t remember this apart from in pictures and videos. There was a girl who went to school the next day and done her GCSEs in her pyjamas, she’s going to remember that forever’.

Shona Harvey lives 5 minutes from Grenfell Tower and went to primary school with Zoe. ‘Ladbroke Grove was a special area for me to grow up in because it’s culturally diverse, and it’s home to one of the biggest street carnivals in the world, The Notting Hill Carnival’, Shoana says. ‘Even myself, I was sitting down with some friends in a cafe, we were talking about what’s going on but then you do pause and think, am I laughing too much? I do think to myself maybe I feel a little better… but then you watch more footage on the news and it hits me again and I can feel my emotions building up and you realise it’s still quite fresh’.

Adrianne McKenzie is a freelance film-maker who spent much of her youth in West London. She was making a film about the closure of Stowe Youth Club near to Grenfell Tower when the fire happened. She picked up her camera and began to record events from the first night. Struck by the de-humanisation of the survivors, spending time on the ground has revealed that ‘…no-one’s really talking much about the people apart from what they can be given. So these luxury apartments or £5,000 from the government… No ones really thought about them as people they are just statistics. I feel like the survivors have been forgotten about. People are fighting a lot for the deceased but not as hard for the people who are still here’.

Reece Yeboah lives underneath Grenfell Tower and sees it every morning. He is a fashion designer and young creative pursuing his dreams. He feels if Princess Diana was alive she would have come and helped the people of Grenfell. ‘My niece goes to nursery in Grenfell Tower so on the morning of the fire I took her to nursery.’ ‘We’re doing this because we’re a community and we’re doing it from our hearts but we shouldn’t have to, the council should be doing this’. I lost 4 or 5 friends in the tower, but it’s probably more, most people in the tower, I used to see them everyday.’

Pilgrim Tucker is a community organiser and campaigner. She has many years experience  of working on projects aimed at amplifying the voices of local residents, service users and community members, supporting them to organise to influence decisions that affect them. She worked with Grenfell residents in 2015 to help them campaign against the refurbishment undertaken KCTMO and Rydon. Since the fire she has continued to work with residents on the Lancaster west estate that surrounds the tower.

There will be an optional donation (£5 + standard ticket) when you book. You can also donate optionally via paypal:

We will be accepting donations for the survivors of the fire who will be attending the evening. 20 million pounds was donated by the public to meet the emergency needs of the survivors, many of whom are still ill from the fire without regular food and basic clothing. The Royal Borough of Kensington and Chelsea Council have imposed eligibility criteria which prevent or delay survivors claiming money in many cases. For example to receive the ‘Fresh Start’ grant of £10,000, survivors must be in permanent accommodation, which they are not.

Nearly all of the 250 families are in temporary accommodation as the permanent accommodation offered is unsuitable or not ready. The small percentage of donations that have been given out for the most part have been awarded to community organisations.

We would encourage you to donate to the fund at the screening to help them get on their feet during this uncertain period of their lives.

The Frontline Charitable Trust is a not-for-profit organisation.