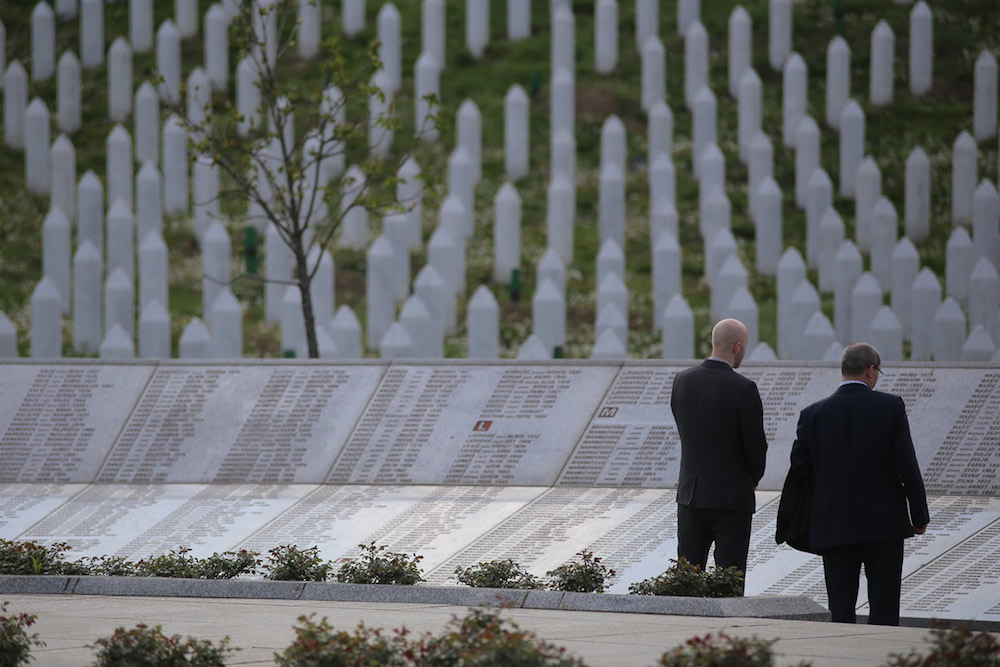 To mark the 23rd anniversary of the Srebrenica genocide, join Remembering Srebrenica to hear from survivors of the Bosnian War and journalists to reflect on reportage during conflict and the responsibilities of the media in war.

The Bosnian War lasted from 1992 to 1995 and led to the deaths of 100,000 people and the displacement of 2.2 million more, the worst atrocity on European soil since the Second World War.

This event will look at the following questions amongst others:

How can journalists sensitively report on war crimes and gender based violence during conflict whilst still exposing the truth? What role does the media play in assisting people to understand the lasting impacts of war? In a world of fake news and genocide denial what is it like to act courageous and speak out from personal experience?

Prof. Jon Silverman is Professor of Media and Criminal Justice at the University of Bedfordshire and former BBC Home Affairs Correspondent. His latest publication is “Crime, Policy and the Media” (Routledge, October 2011), which traces the relationship between the media and criminal justice policymaking over the period, 1989-2010. His other books include “ Crack of Doom” (1994), the first British work to examine the phenomenon of crack cocaine and Yardie violence ; and “Innocence Betrayed” (2002) with Prof. David Wilson, which analysed the News of the World’s naming and shaming campaign against sex offenders and its social consequences. He is a criminal justice analyst and regular broadcaster. He has made numerous documentaries for Radio 4, including, most recently, “The No I Forensic Detective Agency” (October 2011) ; and “Guns, gangs and families”(2009). In 1996, he won the Sony Gold Award as Radio Journalist of the Year for reports on the “Today” programme on the UK’s war crimes inquiries.

Lejla Damon grew up knowing she was different. It wasn’t until much later that she discovered the horrific circumstances surrounding her birth. Shortly after war broke out in Bosnia, Lejla’s birth mother, Safa, was taken to a concentration camp, where men were separated from their families and the women were often raped, killed or both. Safa, who is Muslim, was raped and eventually gave birth to Lejla on Christmas Day 1992 in Sarajevo. A British couple, a news agency crew reporting on the siege of Sarajevo for Sky News, heard about Safa’s story and came to the Sarajevo hospital to interview her. Safa was so traumatised by her harrowing experiences she told them she was incapable of looking after her baby. The British couple was given permission to evacuate Lejla from Bosnia and later adopted her in the UK.

Lejla’s adoptive parents ensured she knew about her Bosnian origins and when she was 18 told her the awful truth about her parentage. After researching the genocide and atrocities which took place in Bosnia, Lejla has started to come to terms with the events that led to her birth. Lejla was determined to make contact with her birth-mother and with the help of Sarajevo police and the Bosnian Foreign Ministry she found her in 2015. Lejla and Safa met in 2017 and now exchange letters and stay in touch. Lejla now uses her story as a platform to talk about sexual violence and the consequences of hate. She works with Remembering Srebrenica in order share her story. Lejla is currently studying for an MBA at the University of Salford.

Siân Damon in the 1980s and 90s, Siân  worked as a news-gathering camerawoman in Eastern Europe, the former Soviet republics and the Middle East. As one of the few female conflict camerawomen, she was given access to places cameramen couldn’t go. In December 1992, she interviewed a Bosnian Muslim woman who had been repeatedly raped in a Serb prison camp. Safa had become pregnant; she had nothing but anger in her heart and said the baby was too painful a reminder of what she had gone through. She would not even hold the baby. Siân and her reporter husband Dan decided that they couldn’t leave the baby to be sent to the orphanage, which they had already filmed as a place of terrible suffering. With permission and support from the government in Sarajevo, they evacuated the baby and later adopted her. They named her Lejla.

Siân travelled to other dramatic stories, including Nagorno Kharabakh, in a helicopter that came under fire, to Prague and Bucharest during the revolutions in 1989, and across Albania during the disturbances as Communism collapsed there. Today she is a photographer and teacher working with young children, giving them visual and creative skills.

Dr Myriam Francois  is a TV presenter, producer and writer with a focus on current affairs, Islam and France. Her documentaries have appeared on C4 and BBC1 among others. She currently presents and produces her own monthly Arts and Culture documentary series “Compass” on TRT world, a global news network on Sky 519. Myriam is the presenter of the Channel 4 documentary “The Truth about Muslim marriage”, as well as two BBC One documentaries, “The Muslim Pound” and “A Deadly Warning: Srebrenica Revisited”, which was nominated for the Sandford St Martin religious programming award 2016. She has also presented a 2-minute explainer video for BBC news on the genocide at Srebrenica.