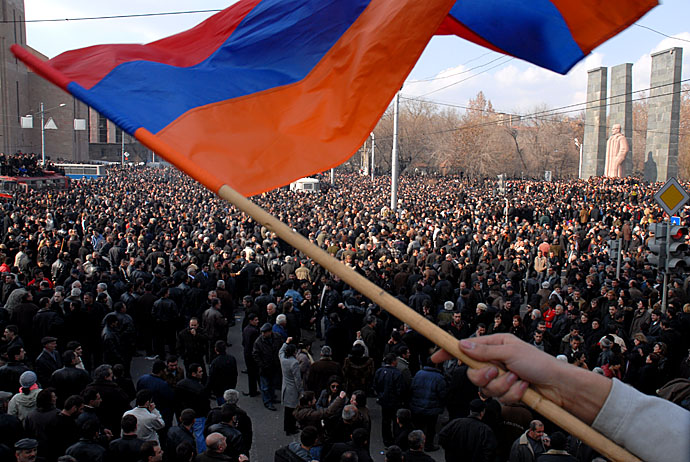 The Guardian reports that seven detained opposition activists, among them a former foreign minister and three MPs, will go on trial this week charged with the "usurpation of state power" following February’s disputed presidential election in the country. Following clashes on 1 March with security services which left at least 10 dead, a 20-day state of emergency was declared and many prominent opposition activists and supporters of the country’s first president, Levon Ter-Petrossian, were detained.

Ter-Petrossian, himself accused of falsifying the 1996 presidential election which secured his second term in office, returned to the political scene last year after an absence of nearly a decade in what was widely seen as an attempt to prevent his successor, Robert Kocharian, from handing over power to the prime minister, Serge Sarkisian. The Guardian calls the trial "one of the biggest […] in its [Armenia’s] short history as an independent country"

Ter-Petrosyan’s supporters, who blamed voting irregularities for the election of President Serzh Sargsyan, began protesting in Freedom Square in mid-February. By night, about 1,000 camped out in freezing temperatures. By day, crowds of up to 50,000 – estimates vary wildly – participated in rallies.

Tensions rose further during the last week of February, and on 1 March police entered the square, claiming they were searching for ammunition. There were running battles through the streets, culminating in the police opening fire, with each side claiming that the other launched the first missile. Ten people, including two police officers, were killed.

More than 70 protesters have already been jailed but it is the seven awaiting trial this week who face the main charges.

Sargsyan claimed 52.8% of the vote, enough to avoid the run-off that some international observers believe should have been held. The bloodshed has obscured argument over vote-rigging.

With the opposition continuing to lay blame for the political situation in Armenia on the international community which initially gave the 19 February presidential election a relatively clean bill of health, controversy continues to surround an ostensibly independent committee established to investigate the circumstances surrounding the 1 March clashes. The Council of Europe is also concerned by the lack of any credible evidence for charging the seven with attempting to violently overthrow the government.

Interestingly, with a government-imposed media blackout accompanying the state of emergency, blogging came of age in Armenia and established itself as the new samizdat, opposition supporters have set up a blog to cover the trial. As The Guardian suggests, with the independence of the judiciary questionable to say the least, all signs are that the international community will closely monitor the trial to see whether the authorities in Yerevan are prepared to live up to their international commitments.
Photo: 1 March Opposition Demonstration, Yerevan, Republic of Armenia © Onnik Krikorian / Oneworld Multimedia 2008