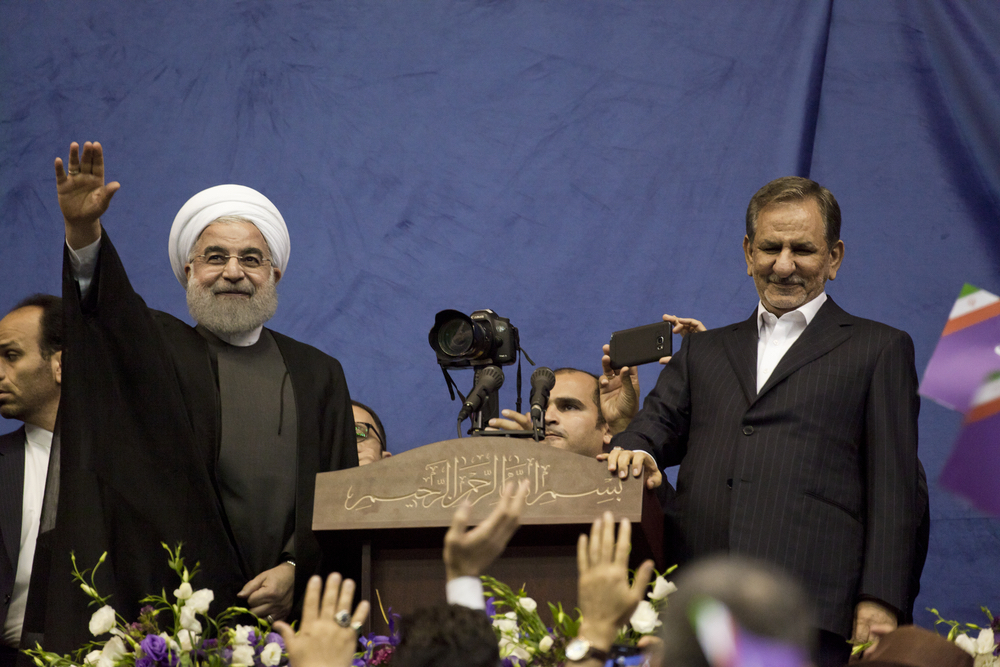 President Rouhani: One Year On

On May 12th the US is expected to review the Iran nuclear deal, our panel reflect on one year of President Rouhani in power, his accomplishments and legacies, both domestic and international.

President Hassan Rouhani was elected as the moderate candidate, who promised to resolve the nuclear dispute with the West, and bring a measure of greater social and cultural freedom to Iran.

Yet mass protests triggered in December 2017 were directed at the economic policies taken by the government and represented some of the toughest domestic challenges to the Iran state in years. Furthermore, arrests of critics and dissidents continue. Sporadic crackdowns on women and youth occur. RSF has described Iran as “one of the world’s biggest prisons for journalists”. The Islamic Republic keeps a tight grip on all its media outlets and the persecution of journalists has only increased in recent months. A state announcement this year of a national security criminal investigation and asset-freezing injunction targeting 152 current and former BBC Persian staff, has led to the BBC appealing to the UN to protect the rights of its journalists and families.

Nevertheless, Rouhani’s supporters argue he must gain credibility through successful nuclear negotiations before he can bring about any domestic reforms, particularly in light of the forces in Iran anxious to demonstrate their continued strength on the world stage. While his year has been a mixed picture, some argue his mandate has always only been to ease the country’s economic pain by rolling back sanctions: greater rights and freedoms at home have never been a priority.

Azadeh Moaveni is lecturer in journalism at New York University in London, former Middle East correspondent for Time magazine and the Los Angeles Times and author of Lipstick Jihad and Honeymoon in Tehran. Her research focuses on how political instability impacts women, and she is writing a book about women and ISIS.

Saeed Kamali Dehghan is a staff journalist with the Guardian. He has previously written from the Iranian capital, Tehran. He is now based in London and was named 2010 Journalist of the Year at the Foreign Press Association awards.

Richard Zaghari-Ratcliffe is husband of charity worker Nazanin Zaghari-Ratcliffe, a British-Iranian dual citizen who has been detained in Iran since 3 April 2016. Zaghari-Ratcliffe, a project manager with the Thomson Reuters Foundation, travelled to Iran on 17 March 2016 to visit her family with her 22-month-old daughter Gabriella. On 3 April 2016, members of Iran’s Revolutionary Guard arrested her at the Imam Khomeini Airport as she and daughter were about to board a flight back to the UK. On 10 September 2016, it was revealed that she was sentenced to five years imprisonment “for allegedly plotting to topple the Iranian regime”.  on 7 May 2016, Richard launched an online petition urging both the Prime Minister of the United Kingdom and Iran’s Supreme Leader to take appropriate action to secure the safe return of his wife and daughter Gabriella. Ratcliffe’s petition has been signed by over 1.5 million supporters in over 155 countries.

Kasra Naji is special correspondent for BBC Persian TV and author of Ahmedinejad: The Secret History of Iran’s Radical Leader.

Charlotte Phillips is a lawyer and freelance writer (The New Arab and anonymously for a national paper). She recently returned to London after spending the past 2.5 years living in Iran and completing a masters degree at the University of Tehran.  During this time she travelled widely throughout the country and in 2016 joined the 22 million Shia making the annual 82km pilgrimage from Najaf to Karbala, Iraq for the observation of Arba’een. Charlotte recently defended her thesis on Iran’s water governance crisis, which is presently being turned into a book. She is also writing a second book on Iran’s popular music scene. Charlotte is currently visiting Iran and will be back just in time to discuss the local reaction to Trump’s announcement regarding the JCPOA.