In the Picture with Irme Schaber: The Life and work of Gerda Taro

Gerda Taro was a pioneering and largely unknown female photojournalist whose work consisted almost exclusively of dramatic photographs from the Spanish Civil War. Irme Schaber, Taro’s biographer and curator of the current exhibition at the Barbican will present and talk about a wide selection of Taro’s work. 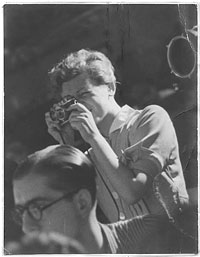 Gerda Taro (1910-37) worked alongside Robert Capa, who was her photographic as well as romantic partner and the two collaborated closely. Her photographs were widely reproduced in the French press and incorporated the dynamic camera angles of New Vision photography as well as a physical and emotional closeness to her subject. While covering the crucial battle of Brunete in July 1937, Taro was struck by a tank and killed.

Irme Schaber is a writer and lecturer on the history of exile photography, photojournalism and print-media. She is currently researching the work and lives of Hansel Mieth and Otto Hagel, two important German refugee photographers who were some of the earliest photographers for Life magazine.