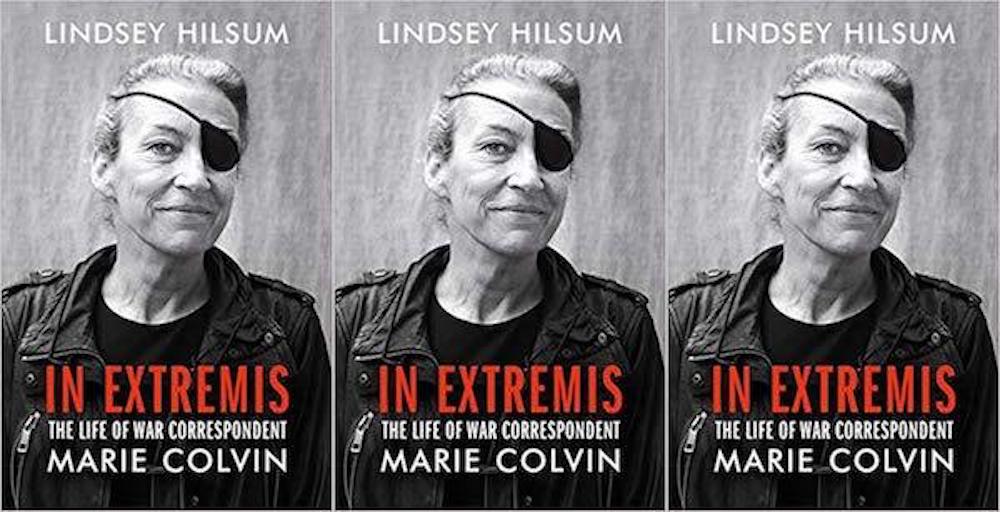 In Extremis. The Life of War Correspondent Marie Colvin

THIS EVENT WILL BE LIVE STREAMED:  sorry…link changed. Now live

‘It has always seemed to me that what I write is about humanity in extremis, pushed to the unendurable, and that it is important to tell people what really happens in wars.’ Marie Colvin, 2001

Biographer Lindsey Hilsum will be joined by Henry Porter to discuss the life and work of Marie Colvin, one of the world’s most experienced foreign correspondents of our time.

Marie Colvin was glamorous, hard-drinking, braver than the boys, with a troubled and rackety personal life. With fierce compassion and honesty, she reported from the most dangerous places in the world, fractured by conflict and genocide, going in further and staying longer than anyone else.

In Sri Lanka in 2001, Marie was hit by a grenade and lost the sight in her left eye – resulting in her trademark eye patch – and in 2012 she was killed in Syria. Like her hero, the legendary reporter Martha Gellhorn, she sought to bear witness to the horrifying truths of war, to write ‘the first draft of history’ and crucially to shine a light on the suffering of ordinary people.

Written by fellow foreign correspondent Lindsey Hilsum, this is the story of the most daring war reporter of her generation. Drawing on unpublished diaries and notebooks, and interviews with Marie’s friends, family and colleagues, In Extremis is the story of our turbulent age, and the life of a woman who defied convention.

Lindsey Hilsum  is Channel 4 News International Editor, and has covered many of the conflicts of recent years including in Syria, Ukraine and the Arab Spring – sometimes alongside Marie Colvin. She was in Baghdad for the 2003 US invasion of Iraq, and in Belgrade for the 1999 NATO bombing. In 1994, she was the only English-speaking correspondent in Rwanda when the genocide began. She has won awards from the Royal Television Society and BAFTA amongst others. Her last book, Sandstorm; Libya in the Time of Revolution, was described by the Observer as “an account with historical depth to match dramatic reportage.”

Henry Porter is a novelist and former commentator for the Observer. He is a winner of the Ian Fleming Steel Dagger award –  for Brandenburg, his novel about  the Fall of the Berlin wall,  which he covered in 1989. His latest book, Firefly, is the story of young boy on the migrant route in 2015 and is the first part of a trilogy set in the turbulent world of US and European politics. He was a friend of Marie’s and sat opposite her when they worked at the Sunday Times in the eighties. This was at a time when she was regularly picking up the phone to   Yasser Arafat and Muammar Gaddafi.