For more than 40 years, Human Rights Watch has defended people at risk of abuse by investigating abuses scrupulously, exposing the facts widely, and relentlessly pressing those in power for change that respects rights. The researchers examine situations in some 90 countries around the world functioning as investigators, journalists, and advocates.

Recently marking their 30th Anniversary and currently screening films in over 20 cities around the world, the Human Rights Watch Film Festival (HRWFF) bears witness to human rights violations in direct storytelling and exposé form, and creates a forum for courageous individuals on both sides of the lens to empower audiences with the knowledge that personal commitment can make a difference. In 30 years we have showcased over 720 films at our global festivals.

The 2020 festival will take place between March 12 and March 20 at the Barbican in London.

Follow the link for further details and tickets: https://ff.hrw.org/london

The Frontline Club is proud to partner on the screening of the following films (see links to book tickets):

On October 30, 2015, a serious fire broke out at the Colectiv nightclub in Bucharest. It was one of the worst disasters in recent Romanian history, with 27 people killed and 180 injured. Fierce protests erupt when 37 of the injured subsequently die from bacterial infections. Director Alexander Nanau follows a team of investigative journalists at the newspaper Gazeta Sporturilor as they uncover a vast health care fraud that siphoned off urgent hospital funding and diluted disinfectants while enriching the country’s most powerful moguls, hospital managers, doctors, and politicians. As the tide begins to turn with increased public awareness, Collective brings home the essential role of a free press in calling out corruption. 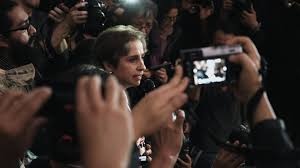 To millions of people in Mexico, the incorruptible journalist and news anchor Carmen Aristegui is regarded as the trusted alternative voice to official government spin, fighting daily against deliberate disinformation spread through news sources, government corruption, and the related drugs trade. When she is fired by a radio station in 2015 after revealing a scandal involving then-President Enrique Peña Nieto, Carmen – with her dedicated journalist colleagues – decides to build a separate news platform. Facing threats of violence in the wake of a prominent journalist’s vicious murder, they must overcome fear for their personal well-being to continue in a shared fight for democracy and justice.