Free Event: Countering Terrorism in the Middle East and Beyond 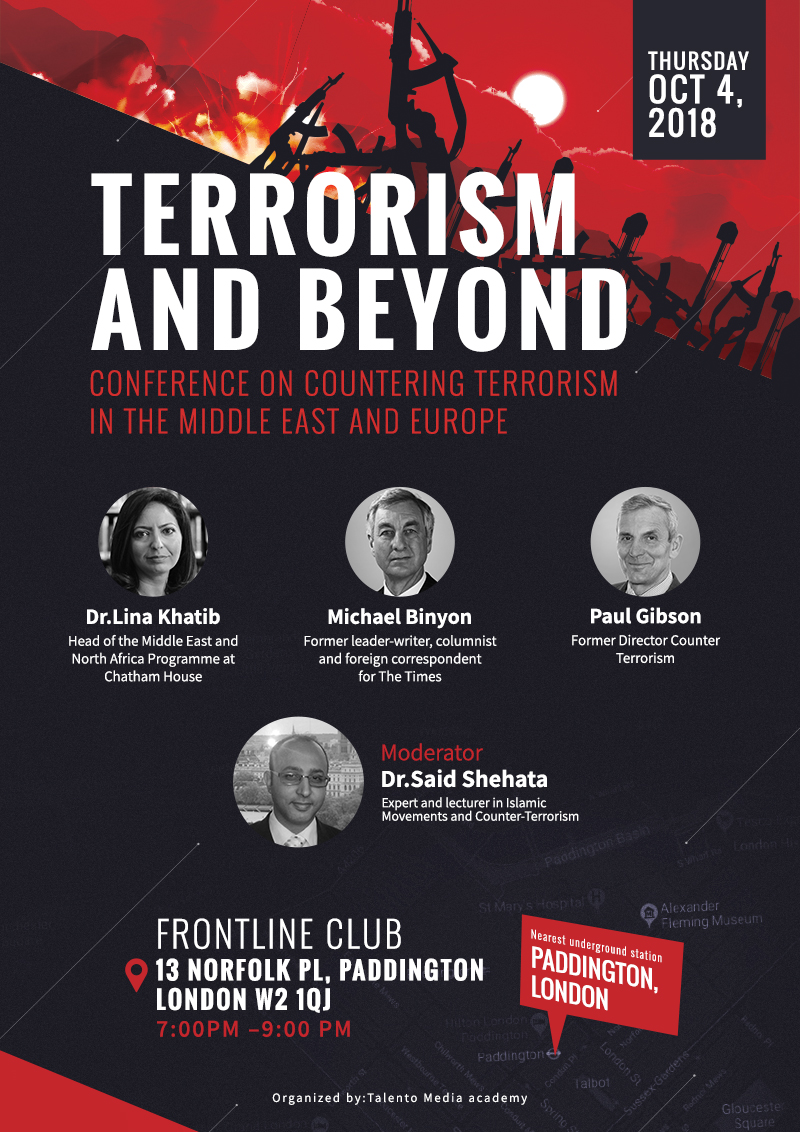 Terrorism and Beyond is a great event to discuss this international phenomenon. Distinguished speakers will talk about the countries which fund terrorism. In addition, the role of laws, security and intelligence to fight terrorism will be tackled. The role of media and non-state actors, such as mosques, schools, community leaders to eliminate this disease will be analysed.

Book here for this free event.

Head of the Middle East and North Africa Programme at Chatham House. She was formerly director of the Carnegie Middle East Center in Beirut and co-founding Head of the Program on Arab Reform and Democracy at Stanford University’s Center on Democracy, Development, and the Rule of Law. Her research focuses on the international relations of the Middle East, Islamist groups and security, political transitions and foreign policy, with special attention to the Syrian conflict.

An English journalist and eminent foreign correspondent, he has been an editorial writer, columnist and foreign correspondent for The Times (of London) since 1971. For 15 years he was based overseas, reporting from Moscow, Washington, Bonn and Brussels, before returning to London to be diplomatic editor in 1991 and becoming the main foreign editorial writer in 2000. he still writes for The Times and other publications, and is a frequent broadcaster for the BBC and French, German, Canadian, Russian and Middle Eastern radio and television. He published “Life in Russia” in 1983, has won two British journalism prizes and was awarded the OBE by the Queen in 2000.

Paul Gibson has extensive experience in the defense, security and terrorism sectors both from the practitioner’s perspective and at the highest strategic level including policy-making
within government and the private sector. His military career culminated as Director Counter Terrorism and UK operations, where he was responsible for global threat evaluation and UK
contingency operations and crisis management. He enjoyed a distinguished military career, including command of an armored brigade in Iraq. He was awarded the Distinguished
Service Order (DSO) whilst in command of an airborne battalion and an MBE for his work on counter terrorism.

Expert in Islamic movements and counter -terrorism Education: undergraduate in Politics and PhD in Politics from the University of London professor of Middle East politics and International Relations at the London Metropolitan University Lectured at LSE, SOAS, Edinburgh, Durham, Westminister universities on the issue of Islamists and their role in politics