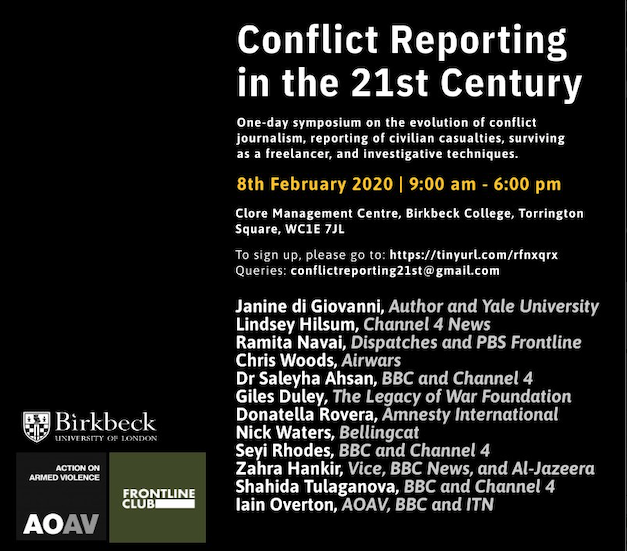 The day will begin with a keynote speech from Janine Di Giovanni. Janine is an award-winning author, journalist and foreign policy analyst. She is currently a Senior Fellow at Yale University, the Jackson Institute for Global Affairs, where she teaches two courses in Human Rights that focus in on recent conflicts and wars. From witnessing the siege of Sarajevo, to the fall of Grozny and the destruction of Srebrenica, to Rwanda in 1994, Janine has reported on conflict and its repercussions for over 25 years. In her keynote, she will examine the evolution of conflict reporting⁠—how both conflicts and the way they are reported have changed throughout her career.

The first session is titled ‘Civilians and conflict: the modern face of war.’ We will hear from reporters who have direct experience of civilians caught up in the cross-fire. These will include Giles Duley, a photographer who has reported on stories from Lebanon, Iraq, Bangladesh, and Colombia. Giles himself was injured by an IED in Afghanistan in 2011 and has subsequently continued to record the impacts of conflict and campaigned for civilian protection.

We will also hear from Dr Saleyha Ahsan, a former member of the British Army Medical Corps. Saleyha has subsequently reported, presented and made documentaries for the BBC and Channel 4 from hostile environments such as Kashmir, Palestine, and Libya. She will bring a medical perspective to discussions of civilian casualties. And Ramita Navai, an award-winning reported for Unreported World, Dispatches and PBS Frontline, who has worked in numerous conflict-impacted countries in a varied and much acclaimed career.

The day will then feature smaller break-out sessions, focused on developing skills. These will include topics such as weapons identification, first aid training, how to prepare for a war zone, and an introduction to open source verification. The aim of these sessions is to provide journalism students, early career journalists, and all those interested with introductions to key aspects of conflict reporting.

After a free lunch, participants are invited to listen to a panel on new tools and techniques to investigate conflicts. Chaired by Lindsey Hilsum, Channel 4’s International Editor, this session examines the changing nature of conflict reporting, the role of digital investigations and how this intersects with on the ground reporting. It will include experts such as Chris Woods, the founder and director of Airwars. A conflict specialist, Chris has worked for the BBC’s Newsnight and Panorama and also set up and ran the Bureau of Investigative Journalism’s award-winning Drones Project. We will also hear from Donatella Rovera, a Senior Crisis Response Advisor at Amnesty International. She has conducted investigations into human rights abuses in armed conflict for over 25 years and has worked in Libya, the Palestinian Territories, Ivory Coast, Lebanon, Algeria, and Syria amongst many others.

The final session of the day focuses on freelancing as a conflict reporter. We will hear from freelancers around the world talking about safety, discrimination, the complexities of earning a living, and the rewards of their jobs. This is an especially crucial conversation given the precarity of journalism and the increased number of freelance conflict reporters.

Overseeing the proceedings of the day will be Iain Overton, the Executive Director of Action on Armed Violence.  Iain has worked and reported in over two dozen conflict zones around the world, and has written two books on conflict – ‘Gun Baby Gun: a bloody journey into the world of the gun’ (Canongate) and ‘The Price of Paradise: how the suicide bomber shaped the modern age’ (Quercus).

Overall, this day hopes to look at conflict reporting in the modern age and highlight the challenges and benefits that such reporting brings.

You can get tickets for the conference here.