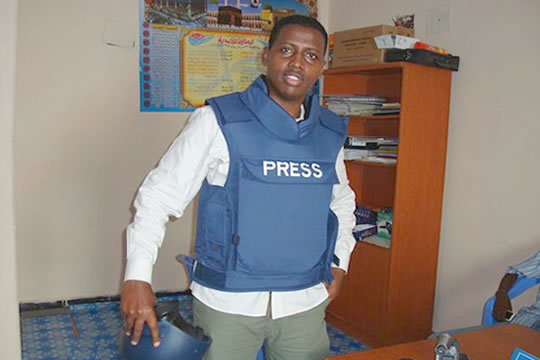 The National Union of Somali Journalists issued journalists with flack jackets and helmets at a ceremony at the Hotel Sahafi in the capital Mogadishu on Thursday. 20 journalists, both independent freelancers and staff reporters, were kitted out with the gear donated by the Doha Centre for Media Freedom,

“These bulletproof jackets and helmets will improve the safety of Somali journalists who are daily threatened by the dangers of flying shrapnel and other dangerous objects as a result of war and violence. We must support our journalists even morally, but above all this is practical solidarity for our colleagues,” said Ali Moallim Isak, NUSOJ Organizing Secretary. link

Somalia is one of the most dangerous places for journalists to work. According to the Committee to Protect Journalists, nine have been killed in the past two years, at least 21 have fled the country and there have been two kidnappings involving five journalists. Canadian freelance Amanda Lindhout and Australian photographer Nigel Brennan have been held hostage for nearly eight months.