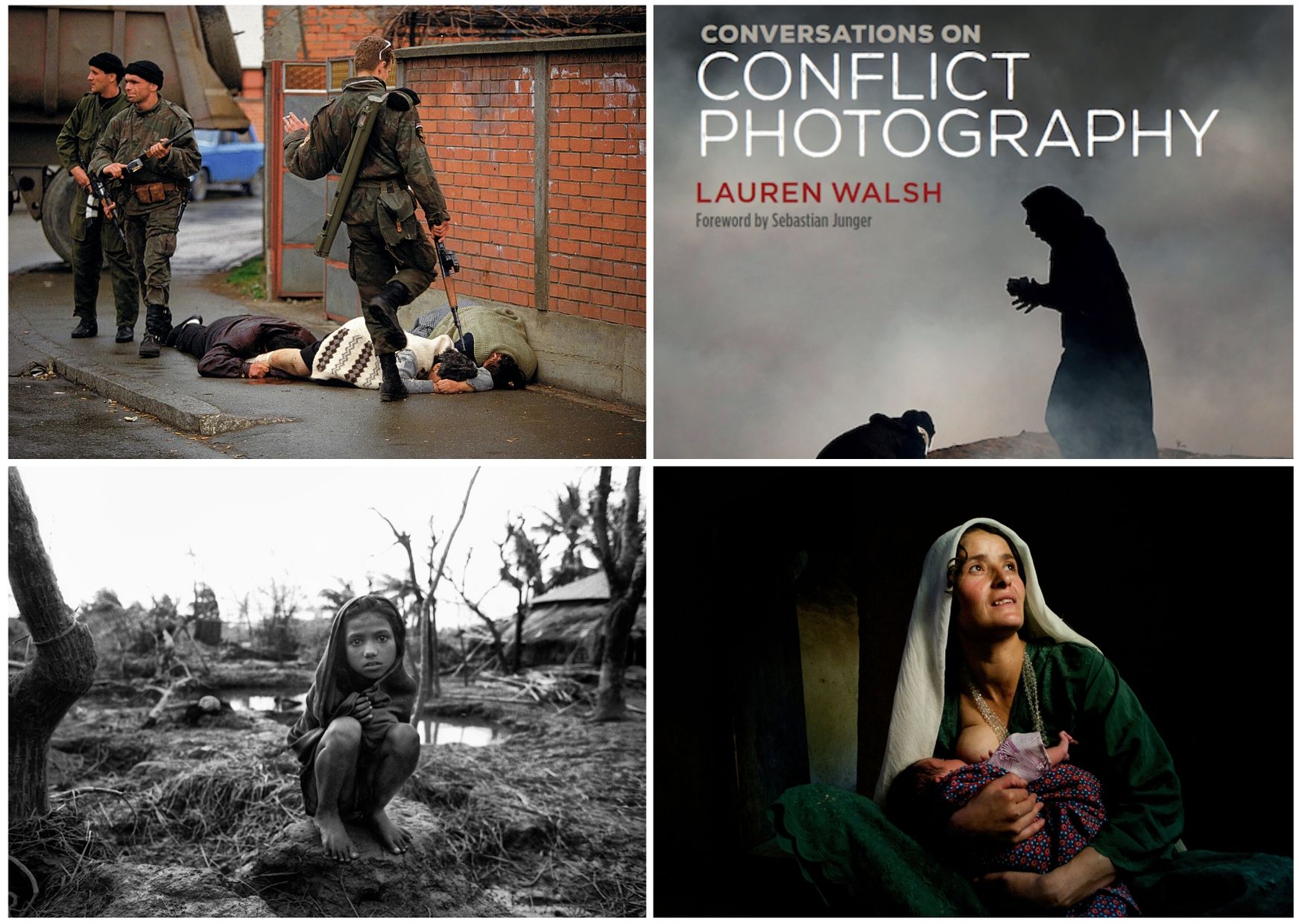 In today’s image-saturated culture, the visual documentation of suffering around the world is more prevalent than ever. But what is the purpose behind taking and showing images of war and crisis? Looking at some of the themes explored in Lauren Walsh’s new book, “Conversations on Conflict Photography”, we speak to award-winning photographers and leading photo editors about their experiences.

Instead of always deepening the knowledge or compassion of viewers, conflict photography can result in fatigue, or even apathy. “Conversations on Conflict Photography” invites readers to think through these issues via conversations with top photographers, key photo editors and vital representatives of major human rights and humanitarian organisations. In Walsh’s book, these practitioners relate the struggles of their craft, from brushes with death on the frontlines to the battles for space, resources, and attention in our media-driven culture.

Alongside Lauren Walsh, speakers include Alixandra Fazzina, an award-winning British photographer focussing on under-reported conflicts and the humanitarian consequences of war; Marion Mertens, the Senior Digital Editor of Paris Match, a weekly French-language magazine that covers national, international, and entertainment news; and Shahidul Alam (via Skype), a Bangladeshi photographer and founder of Drik Picture Library, a Bangladesh-based photo agency established to promote the work of local photographers.

A limited number of copies of “Conversations on Conflict Photography” will be on sale at the event. Cash sales only (£25).

Shahidul Alam is a Bangladeshi photographer and the founder of Drik Picture Library, a Bangladesh-based photo agency established to promote the work of local photographers. Alam has documented a wide range of events, including the movement for democracy in Bangladesh, natural disasters, human rights and social issues like class inequality, and murders by the “death squads” in Bangladesh. As a result of his work, Alam has received death threats, and in 1996 he was stabbed eight times. In 2018 he was arrested after publicly criticizing the government’s violent response to student protests. Alam is an outspoken advocate for the correction of human rights injustices. Alam’s work has been shown in museums around the world. He received the 2014 Shilpakala Padak, the highest state award given to Bangladeshi artists, and in 2017 he was given a Lifetime Achievement Award at the Dali International Photography Exhibition in China. In 2018, after his arrest by the Bangladesh government for speaking out, he was named one of Time’s Persons of the Year.

A British photographer and author represented by NOOR Images, Alixandra Fazzina’s work focuses on under-reported conflicts and the often forgotten humanitarian consequences of war. Studying Fine Art, Alixandra Fazzina began her career as a war artist in Bosnia. Going on to work as a frontline news photographer for the press she has since worked independently throughout, Africa, the Middle East and Asia. Known for her in-depth investigative reporting and uncanny ability to work in the most difficult social and geographical environments, Alixandra is recognised for her compassionate and empathetic approach towards the human condition. Alixandra’s reportages have been published in books and across international titles and her photographs exhibited in museums and galleries worldwide. Alixandra Fazzina’s book “A Million Shillings; Escape from Somalia” was shortlisted for the Prix Pictet and for humanitarian and photography book awards. In 2010, Alixandra was recognised as the winner of the highly prestigious UNHCR Nansen Refugee Award for her striking coverage of the devastating human consequences of war.  Alixandra also teaches documentary photography, lecturing at academic institutions worldwide, specialising in ethics and journalism and visualising migration.

Marion Mertens is the Senior Digital Editor of Paris Match, a weekly French-language magazine that covers national, international, and entertainment news. Mertens oversees content on all web, social media, and mobile formats at Paris Match, including the magazine’s daily edition on Snapchat Discover. Prior to this, she was the magazine’s Deputy News Editor for fifteen years. Mertens began her career as a “news desker” at Gamma Press Images, and was later a photo assignment editor for Gamma Liaison in New York. She then worked as a photo editor and news reporter at the French weeklies Le Figaro, l’Express, and VSD, before she joined Paris Match in 1998. In 2017 and 2018, she served on the jury of the Istanbul Photo Awards competition.

Lauren Walsh, an expert on conflict photography, is a professor and writer. She teaches at The New School and New York University, where she is the director of the Gallatin Photojournalism Lab. She is also the director of Lost Rolls America, a national public archive of photography and memory. Walsh’s newest book, Conversations on Conflict Photography (2019), examines the value of documenting war and humanitarian crisis in the contemporary moment. She is the editor/co-editor of three other books on photography: Macondo, a photo book documenting the long-term conflict in Colombia; Millennium Villages Project, a photography book on efforts to relieve extreme poverty in sub-Saharan Africa; and The Future of Text and Image, with collected essays on visual culture and literary studies. She has also published widely in academic and mainstream media. Walsh is currently co-directing Biography of a Photo, a documentary film about two iconic images of conflict, and her research concentrates on questions of visual media and ethics. She holds a PhD from Columbia University and has been distinguished with NYU’s Excellence in Teaching award.

Main image (clockwise from upper left): 1) Members of the Serbian paramilitary group known as Arkan’s Tigers with Muslim civilians who have just been shot, Bijeljina, Bosnia, 1992. © Ron Haviv/VII. This photo, among others by Haviv, is featured in Conversations on Conflict Photography. 2) The cover of Conversations on Conflict Photography by Lauren Walsh. Photo by Spencer Platt/Getty Images. 3) Siamoy breastfeeds her month-old baby boy, Hakim, whilst visiting her mother, a traditional birth attendant, at their remote home in Khourdakon village. Situated in the northerly mountainous province of Badakshan, the area has the highest rate of maternal mortality in the world. August, 2008, Shahr-i-buzorg, Afghanistan. © Alixandra Fazzina/NOOR. 4) Sufia was the only survivor in her family. The others all died when their home was destroyed by the cyclone of April 29, 1991, in Anwara, Chittagong, Bangladesh. Sufia was taken in as part of another family. © Shahidul Alam/Drik/Majority World.