The idea behind members’ BookNights is to have a thoroughly good time, encourage reading and discussion, and to end the night both happier and wiser than when it began. For more information about membership and the other benefits on offer, please contact membership coordinator Sophie Kayes.

For July’s BookNights we are delighted to welcome the distinguished former foreign correspondent for the BBC, Martin Bell OBE, who will present his book The End of Empire over an intimate dinner with Frontline Club members.

Before his career as a BBC correspondent and independent MP, Martin Bell also served as a soldier in Cyprus between 1957 and 1959. In a chocolate box in his attic many years later he found more than 100 letters that he had sent home to his family. He was not a journalist then, but the letters are war reports of a sort, impressions of what it was like to be a conscript on active service during the EOKA rebellion against British rule.

These letters describe road blocks and cordons and searches, murders and explosions and riots – and a strategy of armed repression that ultimately failed. The reality of the failure dawned on the young soldier only at the end, as he burned his intelligence files in perforated oil drums while the EOKA fighters were being feted as heroes in the streets of Nicosia. ‘It seemed,’ he wrote, ‘like a bonfire of the policies.’ 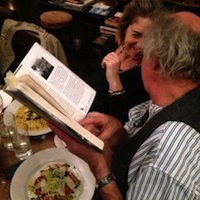 Guests will be expected to have read the book, and to be ready and willing to contribute to the conversation. This will be an in-depth discussion rather than a standard format Q&A. The evening will start with drinks at 7:00 PM, following by a sit-down dinner at 7:30 PM. We will get to know one another over starters before the introduction of the evening’s guest author.

The event will be hosted by Frontline Club director, Pranvera Smith, and founding member and senior correspondent at The Guardian and The Observer, Ed Vulliamy.