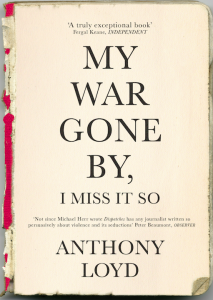 Twenty years after its first publication, Anthony Loyd’s classic piece of war writing is reissued with a new foreword by the author. My War Gone By, I Miss It So is a haunting account of the war in Bosnia. From 1993 to 1996 Anthony reported for the Daily Telegraph and The Times as a special correspondent, witnessing the killings of one of the most callous and chaotic clashes on European soil.

Addicted to the adrenaline of armed combat, he returned home to wage a longstanding personal battle against substance abuse. Shocking, violent, yet lyrical and ultimately redemptive, this book is a breathtaking feat of reportage and an uncompromising look at the terrifyingly seductive power of war.

“An extraordinary memoir of the Bosnian War… savage and mercilessly readable… deserves a place alongside George Orwell, James Cameron and Nicholas Tomalin. It is as good as war reporting gets. I have nowhere read a more vivid account of frontline fear and survival. Forget the strategic overview. All war is local. It is about the ditch in which the soldier crouches and the ground on which he fights and maybe dies. The same applies to the war reporter. Anthony Loyd has been there and knows it” – Martin Bell, The Times

Guests are encouraged to read the book before the event, although you are also welcome to join if you’ve just started your exploration. Previous experience has shown that members often gain insight and inspiration from discussions with the author, which enable them to continue reading the book in a new light.

This will be an in-depth discussion rather than a standard format Q&A. The evening will start with drinks at 7:00 PM, following by a sit-down dinner at 7:30 PM. We will get to know one another over starters before the introduction of the evening’s guest author.

The event will be hosted by Frontline Club director, Pranvera Smith, and founding member and senior correspondent at the Guardian and the Observer, Ed Vulliamy.

The idea behind members’ BookNights is to have a thoroughly good time, encourage reading and discussion, and to end the night both merrier and wiser than when it began. For more information about membership and the other benefits on offer, please contact membership coordinator Sophie Kayes.