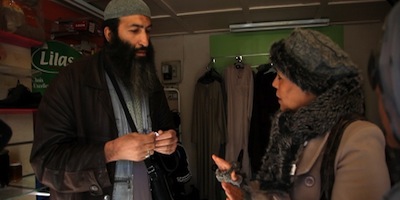 With Tunisia in turmoil over the banning of the Salafist group Ansar Al-Sharia, this BBC Arabic documentary reveals the extraordinary inner workings of a group of Jihadi Salafists closely associated with them in Bizerte, a city north of the Tunisian capital. It shows their leader, Abdesslam Sharif, holding court in his kiosk as locals come to him with a range of problems; from a woman refusing her husband a divorce, to a man accused of grooming a teenage boy.

The film also reveals for the first time how the Salafists make their own rules, as they round up and punish those who infringe their strict interpretation of Islamic law. This film examines how the Salafists implement what they see as God’s law in Bizerte, and how far they are prepared to go to impose it on others. From Tunisia to Egypt and beyond, Salafists pose a serious challenge to authorities. The battle for influence and control is only just beginning.

The screening will be followed by a Q&A with Zuhair Latif, the BBC Arabic reporter on The Battle for Bizerte. Zuhair Latif is a Tunisian journalist who has 17 years of experience in broadcast journalism, covering conflicts in many countries including Afghanistan, Iraq, Ethiopia, Eritrea, Kosova, Chechenya, and East Timor. The Q&A will be chaired by BBC Arabic TV presenter, Makki Helal.

This screening is organised by BBC Arabic.