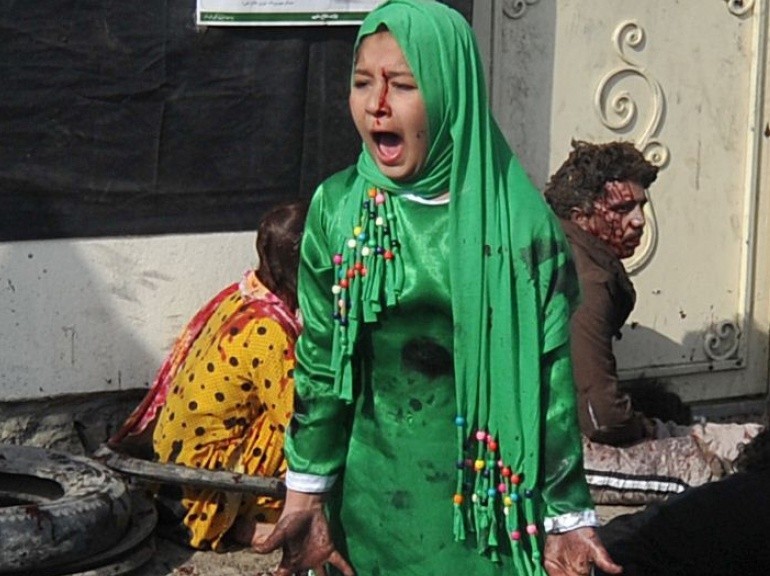 Picture above: Tarana Akbari, 12, screams after a suicide bombing at Abul Fazel Shrine in Kabul on Dec. 6, 2011 Photograph: AFP/Massoud Hossaini.

It is almost 20 years since the Taliban regime was removed from power in Afghanistan and the Allied military engagement in the country began. Any change made is now threatened as the United States seeks a way to broker peace with the insurgents. Massoud Hossaini is an Afghan photographer who won a Pulitzer prize for his heart-wrenching picture of a young woman in the aftermath of a suicide bombing at a Shia mosque in Kabul. Rupert Frere is a soldier in the British Army, who as a photographer has chronicled life on the military frontlines. They will discuss their work on their very different frontlines. They will be joined by Weeda Mehran, an Afghan academic who specialises in conflict and insurgency. And Waliullah Rahmani, an academic, analyst and media entrepreneur. Moderated by Lynne O’Donnell, author and journalist, bureau chief in Afghanistan for The Associated Press and Agence France-Presse (2009 and 2017).

With Pulitzer Prize Winning Photographer Massoud Hossaini, born in Kabul in 1981, during the Soviet occupation. His family fled to Iran when he was six months old. As a young adult, Massoud became involved in activism and began to record the events he witnessed through photography. In 2002, after 9/11 and the start of the US war in Afghanistan, Massoud returned to his home country and received training from the AINA Afghan Media and Cultural Center in Kabul. He was a staff photographer for AFP & chief photographer for The AP between in 2007 and 2019. He is currently studying for a degree in political science at the American University of Afghanistan. He has won a breaking-news Pulitzer Prize in 2012, as well as the World Press Photo award the same year.

Lynne O’Donnell, journalist & author. Between 2009 and 2017 she was Afghanistan bureau chief for AFP and The Associated Press. She completed an MA in war studies at King’s College London in 2019. She writes about Afghanistan for Foreign Policy magazine, among others, and is working on her next book.

Dr Weeda Mehran, a lecturer (Assistant Professor) at the Department of Politics and the Director of MA in Conflict, Security and Development at the University of Exeter.

Rupert Frere,  an award-winning Combat Photographer, a highly experienced photographic instructor with a twenty-two-year career in the British Forces.