A portrait of Russia with Irina Prokhorova and Oliver Bullough 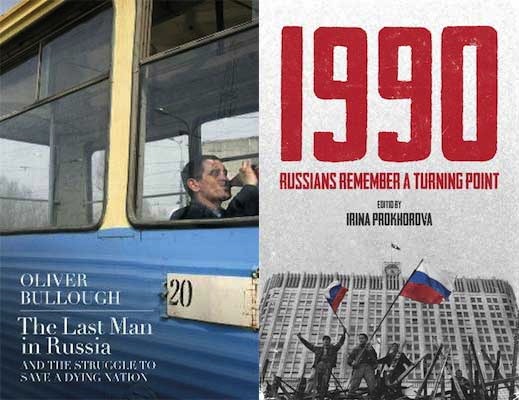 Irina Prokhorova, founder and editor-in-chief of New Literary Observer, and Oliver Bullough, Caucasus editor for the Institute of War and Peace Reporting, will be joining us in conversation to offer two different portraits of Russia charting historical change.

1990: Russians Remember a Turning Point, edited by Prokhorova, brings together a fascinating collection of documentary evidence that charts the lives and hopes of ordinary and elite Russians at one of the great turning points in history, the fall of Communism.

The Last Man in Russia: And the Struggle to Save a Dying Nation by Bullough also charts historic change but through the life of an Orthodox priest, Father Dmitry. Following in his footsteps, Bullough reconstructs the world he experienced: the famine, the occupation, the war, the frozen wastes of the gulag, the collapse of communism and the excesses that followed it.

Chaired by journalist and Pulitzer Prize-winning author Anne Applebaum. She is a columnist for the Washington Post and Slate, and director of Political Studies at the Legatum Institute in London. She is author of Gulag: A History and most recently Iron Curtain: The Crushing of Eastern Europe 1944-56.


Topics:
Past Event, 1990 Russians Remember a Turning Point, Irina Prokhorova, Oliver Bullough, Russia, The Last Man in Russia And the Struggle to Save a Dying Nation
Talk
Thursday 18 April 2013, 7:00 PM