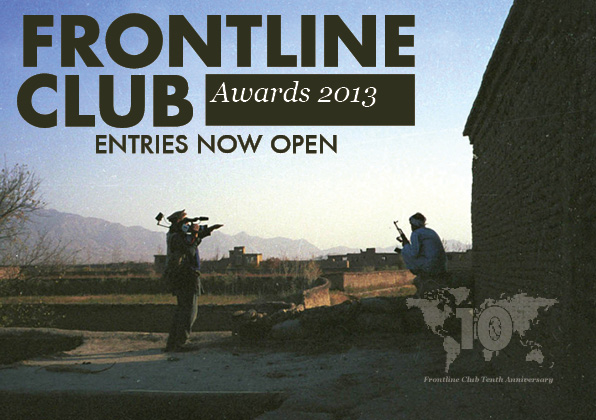 The Frontline Club Awards return in 2013 and this year we are celebrating our tenth anniversary.

Over the past six years the awards have seen many emerging talents and established names recognised by their peers for outstanding work in various fields, and this year will be no different. Submissions can cover any topic and be from any country. They must possess the values of journalistic integrity, courage and independent spirit that the Awards seek to recognise.

The Frontline Club Tribute Award acknowledges lifetime achievement or work that has not received the acclaim that it deserves. It is judged on a lifetime of work and is decided by a panel of judges, made up of Frontline Club members. Last year’s panel included Jeremy Bowen, Gary Knight, Carlotta Gall and Jon Lee Anderson.

We are delighted to announce that the evening will feature a keynote speech from Sir Harold Evans and a special video message from Glenn Greenwald.

The 2013 awards ceremony will take place on Thursday 24 October 2013 and will be hosted by Channel 4 News anchor Jon Snow. It will once again kindly be supported by Vodafone, Chivas Brothers and Canon UK & Ireland.

Sir Harold Evans is an author, historian and former editor of The Sunday Times, from 1967-81. During his time as editor he was responsible for investigative reports and campaigns including the plight of British Thalidomide children, the exposure of Kim Philby as a Soviet spy and the publication of the diaries of former Labour Minister Richard Crossman. Since he left The Sunday Times he has taught at Duke University, served as editor-in-chief of The Atlantic Monthly Press and the US News and World Report and he was also the founding editor of Conde Nast Traveler. He has published several books, including The American Century, They Made America and his memoirs My Paper Chase. He was knighted for services to journalism in 2004.

Glenn Greenwald is a columnist on civil liberties and US national security issues for The Guardian. In June 2013 he was central to revealing the extensive internet and phone surveillance conducted by the US National Security Agency (NSA) after working with whistleblower Edward Snowden. A former constitutional lawyer, he was until 2012 a contributing writer at Salon. He is the author of How Would a Patriot Act?, a critique of the Bush administration’s use of executive power; A Tragic Legacy, which examines the Bush legacy; and With Liberty and Justice For Some: How the Law Is Used to Destroy Equality and Protect the Powerful.