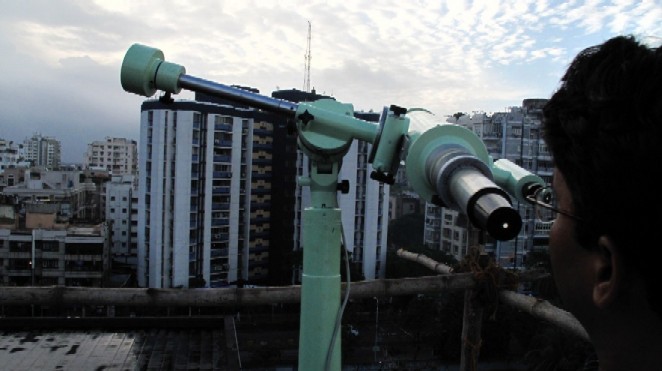 The dichotomy that rests within a modernizing city with an ancient heart came out of the shadows early on Wednesday as thousands strove to catch a glimpse of India’s final total solar eclipse for another century to come. Science and superstition held their own across their respective constituencies in Kolkata, though there was a shared animosity towards the weather gods for dispatching an errant cloud cover that hid the sun through much of the eclipse.

Atop the Birla Industrial and Technological Museum, a small army of school students stared intently at the skyline through their instruments. Chaperoned by teachers and museum personnel, there was little enthusiasm lost throughout the dawn vigil, despite only occasional viewing of the celestial spectacle. Amidst instructions to use protective gear and short discourses on the specific phases of the eclipse, applause erupted every time the shadowed sun made an appearance.

Completely enveloped by scientific conversations, the cultural and religious manifestations of a solar eclipse were lost on this gathering of stargazers. "The superstitions surrounding eclipses are completely rubbish. Not only do they lack any scientific validation, but I wouldn’t miss this once-in-a-lifetime opportunity for anything in the world," class XII student Pranik Basu asserted.

Alongside him, Swagato Roy, another final-year school student, casually added: "All of those myths are bogus."

Of the older generation present, too, there were few takers for the ancient traditions that are connected with such specific celestial occurrences. "When I was pregnant with my daughter, my family wouldn’t allow me to watch the eclipse for the fear of harming the fetus. Despite their best efforts to keep me indoors, I sneaked out and saw it. As it happened, my daughter was born just fine," school-teacher Ranu Datta revealed.

A few kilometers away from the scientific citadel, at Chandpal Ghat by the Hoogly river, myth and ritual dominated all else. Between chanting, bathing and rites, the spiritual gravity of the eclipse lay bared.

"This is a time of great significance and shouldn’t be easily disregarded. My family and I haven’t eaten anything since last evening. We’ll break our fast after bathing in the river and praying," D A Sharma, from Chennai, explained.

Standing by the clay coated stairs of the ghat, housewife Laxmi Saha spoke of certain traditions that she continues to strictly follow.

"I don’t cook anything during an eclipse and I always leave a tulsi (holy basil) leaf in the leftovers, as the food spoils otherwise. We also don’t eat during this time and the clothes worn now must be washed properly before being used again," she asserted.

"And pregnant women, especially, should ensure that no sunlight touches their body during a solar eclipse. It can deform the child," she added after a short pause.

Under a darkened sky, one city told two very different tales about a single shadowed sun.