The Mumbai terror attack on 26/11/08 shocked the world, and India. Months later, I noticed a malfunction on Google News which attributed three BBC News articles to the only 26/11 terrorist alive — Mohammed Qasab. After working on the story for three days, it finally appeared in The Times of India on August 15, which is incidentally India’s Independence day. Hours after the story went out, though, the online news service swifly made the required corrections. Below is a screen shot of the error. 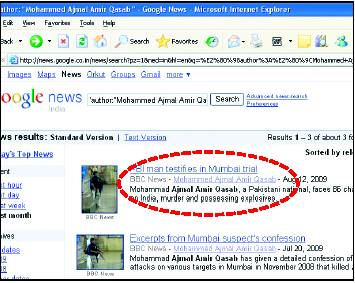 First a labourer in Lahore, followed by a stint at a jihadi camp, then shooting his way into becoming India’s most-reviled terrorist, and now supposedly a journalist. Google News has given Mohammed Ajmal Amir Qasab the status of a BBC correspondent reporting out of Mumbai, albeit mistakenly.

The ubiquitous Internet utility, which is used by millions daily to find and view up-to-the-minute news headlines and related photos, has erroneously attributed three BBC News articles to the Pakistani national — the lone 26/11 gunman alive — who has been charged on 86 counts.

A search given for ‘author:"Mohammed Ajmal Amir Qasab" on Google News on Independence Day-Eve, threw up three stories dated July 20, July 27 and August 12, 2009, attributed to Qasab. The terrorist’s name appears alongside ‘BBC News’ — the same author-line format that Google News places media houses and journalists in. It even adds a link to Qasab’s name, which leads to the three stories.

To add to the irony of the situation, the blunder makes it appear that Qasab is reporting for BBC News about his own trial.

In its functioning, Google News is similar to the Google search engine in that it collects all the web information it can find, creates an index with that information, and serves it to users via a simple web search interface in less than half a second. It continuously ‘crawls’ thousands of English-language news sites and thousands more news sites from around the world to throw up results for a search.

The Google ‘search by author’ feature — which has credited Qasab with his three BBC News stories — allows anyone to find more articles by individual reporters.

"We look at patterns in different articles to identify where author bylines are usually placed. We also do named entity extraction to find names in the articles. By putting those two together, we usually get author names with a high degree of accuracy," a Google spokesperson told TOI.

In this instance, though, Google seems to have picked up Qasab’s name from the caption below his photographs — all three showing the AK-47 wielding terrorist during the bloodbath at Mumbai CST on November 26, 2008.